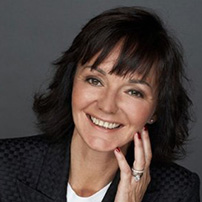 Born in Brescia, Emanuela graduated in Political Sciences at Università degli Studi in Milan, Italy and has been since 1993 CEO of Rubinetterie Teorema Spa, a leading company in the sanitary fittings sector with more that one hundred years of history. Since 2011 Emanuela is Founder & CEO of Atman Advisory
Married to Gian Luigi Costanzo and with one 24 years old daughter Talita, Emanuela managed to successfully match personal and professional life: she received several awards for her contribution to the development of women, including the nomination as Mont Blanc Business Woman of the Year, the prestigious international award established by the world famous German brand to highlight the increasing role of women entrepreneurship in Italy.
Emanuela has been elected Deputy Chairwoman of AIDDA (Italian Woman Entrepreneur Association) both in 2005 and 2008 after serving for almost 10 years as Chairwoman of the regional delegation in Lombardy. In June 2006 she won the AEREC “Successful Women” Award as the first Italian woman entrepreneur to hold a press conference and company meeting in the Muslim Sultanate of Brunei.

Among other, she has been speaker at the MBA program “Women and Leadership” of IMD in Lausanne, Switzerland and the only Italian speaker at the FBN International Roundtable for Women in Family Business, a seminar held at the London Business School Institute for Family Business.
In February 2012 she has been invited in India, Bandalore, at 5th IWC International Women Conference as first Italian Speaker to debate how Technology can support Environment

November 2012 invited as first round table coordinator rappresenting Italy – at International Leadership Symposium on Ethics in Business at European Parliament Bruxelles , debating on Transformational Leadership for Excellence”
In July 2013 elected Member of the Board Hong Kong –Italy Association
In September 2013 has been named Director of Institutional Relations of Softlab an important ICT Company based in Rome Italy
In June 2014 elected Member of Wil Board of Directors The European Network. For Women in Leadership
In October 2016 elected member of Contents Commision Wil . President Paulina Dejmek Senior Economic Advisor of Jean Claude Junker President of Euopean Commission