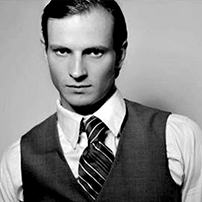 Is the current executive producer and set coordinator for Art in fusion TV also he is a model and actor and previous MR INTERNATIONAL UK 2013-2014. He also obtained the highest people vote and won the title of WEB Champion 2013-14.

To name a few of his recent acting roles; He has played a character called Lucky in the TV Episodes “Dickensian” BBC , a Russian gangster in a film called “Run and Hide”, a Hitman and one of main characters in feature film called “Target”, a gang member in the film “Wild Ones” , part of the cast in a film “To Trend on Twitter”. He had the opportunity to act in a small role, alongside to Tom Hardy in the film ‘Legend’, he also played as a living statue in a Fashion film “Fashion Fairy Tale” that entered nominated in LaJolla film festival in LA, also he has being in various commercials for different luxury items and film promotions for example he was one of the Spartans for the film “300 – Rise Of An Empire” film “Warner Bros” promotion that was viral around the world.