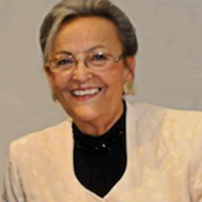 Elly Pradervand, President/CEO of the Women’s World Summit Foundation (WWSF), is a Swiss citizen of German origin, born in 1939 and mother of two married children and grandmother of four. She was educated in private schools in Germany, works in 3 languages and travelled the world. She has been active in several humanitarian organizations for the past 40 years in the field of public
education for development and advocacy for women and children’s rights. In 1991, she founded the Women’s World Summit Foundation (WWSF) (a Swiss, humanitarian, not-for-profit, lay organization (with United Nations
consultative status), serving as an international NGO with a network coalition around the world for the empowerment of women and children and the implementation of the United Nations development agenda. The aim of WWSF is to promote, advocate for and mobilize civil society to get involved in helping to realize urgent sustainable development objectives, promised by the world
community at numerous UN summits and conferences, and to empower women, youth and NGOs in claiming their basic human right to development, equality and peace.
Elly created and convenes the following WWSF programs and campaigns:

The annual WWSF Prize for women’s creativity in rural live since 1994 with 452 Prizewinners from 130 countries warded to-date
Co-created the International Day of Rural Women-15 October at the Beijing 4th World Conference on Women in 1995, which became an
official UN Day in 2007.
Publishes the annual empowerment Kit: “17 Days of Activism for the empowerment of rural women leaders and their constituencies 1-17
October”, with a presentation of 17 themes and ideas for action.
Publishes the annual prevention Kit: “19 Days of activism for the prevention of violence against children and youth 1-19 November” with
19 themes and ideas for action.
Publishes annually its national mobilization Kit (in French and German): “365 Days for the elimination of violence against women and youth inSwitzerland”, and co-leads a national campaign to create a Switzerland free from gender-based violence against women and youth by 2030.
Promotes and organizes occasional training sessions to create “Circles of compassion” to help increase civil society action to end violence against children and youth around the world.
Participates in various UN and NGO working groups dealing with human rights and women and children’s development issues
Attends, whenever possible, the UN Commission on the Status of Women at New York, regular UN Human Rights Council sessions, and
and trains staff, university inters and volunteers.
Elly is a member of the Geneva Diplomatic Club, the NGO committee on the status of women, several NGOs and women’s groups and leads the committee for action of the Swiss White.