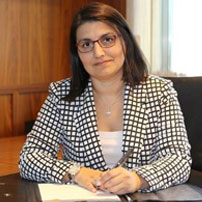 Eliza Livadiotou studied economics at the University of Cambridge (MA Hons) on a Cambridge Commonwealth Trust scholarship. In 1995-1999 she worked for the audit firm Arthur Andersen in Cambridge, where she qualified as a Chartered Accountant having obtained the prizes 1st in Order of Merit at Intermediate level and 7th in Order of Merit at Final level. In 1999 she returned to Cyprus and has been employed by Bank of Cyprus, initially as Assistant to the Group Chief General Manager and since 2005 as Manager Group Finance and Tax Planning. In 2012 her duties were extended to include Group Strategy and Corporate Finance. In December 2013 she was appointed as Chief Financial Officer and in April 2016 as Finance Director.She is married with 2 children. She is a member of the Financial Services Committee of the Institute of Certified Public Accountants of Cyprus since 2006 and she chaired the Committee during 2014-2016.