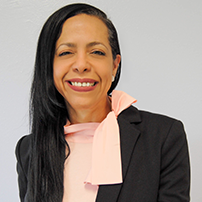 Known online as @ERGeekGoddess, Elianne is an award-winning, nationally recognized social entrepreneur and community advocate. She is considered one of the most influential Latinas in social media. In her current role as the Senior Director of Communications and Public Affairs at the National Latina Institute for Reproductive Health, she leads the development and
implementation of communications strategies to build Latina power for reproductive health and justice. Recently, she became part of the Forbes Magazine Communications Council. She was also named an international committee member of Women Leaders of the Americas by the Documentation Sciences Foundation and the Organization of American States (OAS); as well as an Advisory Board member for the United Nations ModelUN News program. Previously, she served as the Latino Digital Coalitions Desk for the Hillary Clinton presidential campaign. Prior to that, she was Principal and CEO of Speak Hispanic and Founder of Border Kids Relief Project.
Elianne lends her broad expertise to projects that raise civic participation, including collaborations with the White House, governmental institutions, and major civic-centered organizations. For years, she has sought to amplify the voices of social justice and marginalized people on her Google+ show and other online/offline initiatives. She is also an internationally sought-after public speaker, with recent presentations at the World Communications Forum in Geneva, at the NATO Headquarters in Brussels, the International Communications Week in Brazil, and many others.
Recognition for her work includes being named a 2017 Latina of Influence by Hispanic Lifestyle Magazine, 2016 Hispanic Leader by the U.S. Embassy of Spain and Fundación Carolina, 2015 Girl Scouts Distinguished Woman of the Year Award, 2014 Women Media Center Social Media Award, 2014 Maryland Governor Social Innovation award, 2013 SmartCEO Brava Awards and many more. Find more of her writing on her blog, or her Huffington Post and Al Día News columns. Find more of her writing on her blog, or her