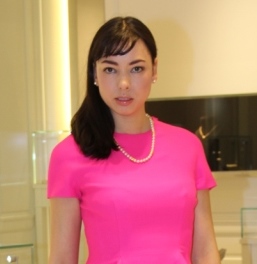 Eliane Chappuis is an actress, singer, film producer, filmmaker, model and author. She can speak English, French, Vietnamese, German and Swiss-german. She grew up in Switzerland. Her Swiss father fell in love with her Vietnamese mother whilst studying in London. Her father taught at the university of Berne and passed away when she was a young girl. Her mother is a Vietnamese aristocrat, worked as a social worker, and amongst other positions has worked for the Red Cross. She is a very wise lady and is Eliane’s mentor. As a child, Eliane spent the summers in the South of France in Plumvillage, which is a Zen-Village belonging to famous Zen master Thich Nhat Hanh. He is a very well known teacher and author of many books and has become a family friend. He was nominated for the Peace Nobel Prize by Martin Luther King. On Eliane’s CD-album «Plumvillage Kid», she sings a selections of his poems. From the 1st to the 9th grade she went to the Steiner School in Berne, and then she spent the 10th school year at the New Girls School, also in Berne. When she was 17, she went to live in Zurich, so she could attend the Zurich Academy of Acting. She also continued modelling to help support herself, which she had actually started at the age of 14, when she was on the books of the top swiss modelling agency Option. She has modelled for lots of well known companies including Swatch, Chopard, Vivienne Westwood, Christian Lacroix, Fabric Frontline and Jill Sander etc. Then she started acting professionally. She had already become used to the stage in many main roles at school, e.g. when she was 14 at the biggest theatre in Berne in «Oliver Twist, «The Wizard of Oz» or «Zobeide». She also sang at the same theatre in «Cavalleria Rusticana» and «Lulu». Then in 1996 she went to America where her lucky star was very evident, when she got accepted to attend Robert Redfords «Sundance Workshop» as a intern where she could learn many aspects of filmmaking. She made many good friends there. Then her acting took off in Los Angeles, where she starred in many different roles. She had the leading role in «On the Roof» with Angus MacFayden (Braveheart) and Diane Baker from Hitchcocks «Milena». Another leading role she had was in the movie «Soundman» with Nick Stahl (Terminator 3) and Danny Trejo (ConAir). She also had the leading role in the episode called «Die Manadarine von Marzahn» from the German series «Die Strassen von Berlin». She worked with Henry Thomas (Legends of the Fall) on «Gangs of New York» with Leonardo DiCaprio (Titanic). Furthermore she organised the finances and did the executive producing work for two movies. A few years ago she graduated successfully from the «Swiss Musical Academy». There she has further developed her singing voice. Already before she returned to Europe, she recorded the song «Le silence nocturne» at the sound studio of drummer Matt Sorum (Guns n’ Roses, The Cult). Then in Switzerland her very own composition of the single «Christmas Time» was aired on BBC Radio 2 in December 2009, and an article appeared in the «Daily Mirror» featuring her career. In 2010, Eliane produced two albums «Plumvillage Kid» and «Christmas Time».

She sometimes gives some oft the proceeds to Charity. This year and last year, Eliane acted in Swiss movies with Switzerlands top stars like Stephanie Glaser, Beat Schlatter, Gilles Tschudi and Andrea Zogg. In 2011 Eliane acted in Brazilian feature film ”The film that is not there” and Swiss shortfilm ”Deadlocked”. She also performed songs in Swiss churches from her Christmas album ”Christmas Time”. In 2012 Eliane acted in a Swiss feature film ”In einem anderen Leben”, hosted a Gala, and her first children’s book ”Starrydance” was published in english and german (”Sternchentanz”).

A few years ago, Eliane founded www.charityladies.ch, a plattform for the World’s Charity people to introduce themselves and their Organizations, causes and to team up…

In November 2012, Eliane made her first documentary film called ”One week in Plum Village” about the buddhist Village of Thich Nhat Hanh in South of France.

The documentary was produced by her company Smiling Deer Films, Records & Books with which she has produced a few films and a few albums. In 2013, Eliane also founded the American Classics Book Club, where she reads American Classics with her girlfriends. Soon her book club will also start reading French and English Classics.

In the End of 2013 Eliane recorded a song called ”For Peace” which she wrote the lyrics for. The musicvideo for the song was filmed in 2014.
In Eliane’s acting career so far, she has already acted in every language she speaks, like French, English, Vietnamese, German and Swiss-German.

In her lifetime, Eliane has already sung for the Last Emperor of Vietnam Bao Dai, world famous buddhist nun Sister Chan Khong and has recieved a compliment from Vietnamese Prince Georges that she sings like Joan Baez.