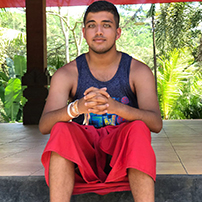 ‘Eashan Thakrar is a 20 year old like no other. Having started up his own charity when he was 16 years old, very rarely will you find someone who has accomplished as much as Eashan at his age. Since its founding, Eashan’s TYP Foundation now has over 1500 volunteers in 14 different countries, all working on various projects to make the world a better place and to empower all sorts of young people from different backgrounds. For this accomplishment, Eashan has received awards from the likes of former prime minister David Cameron, The Princess Diana Award and even Prince Charles, whilst The Youth Project Foundation has been commended by various other awards schemes. Whilst on a gap year, Eashan had a vast number of different experiences, including building his own digital currency, working in the Bollywood music industry where he organised many shows and produced music videos around the world, shadowing top industry professionals in their field and much more, all whilst working on expanding TYP Foundation. He now attends Cardiff University in the UK where he is reading Economics and Philosophy while building a new TYP team’