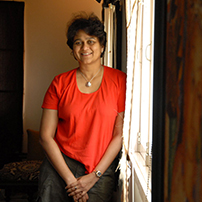 eDurga Das is the Founder and Managing Partner of Das Star, a vehicle to generate a new model of investing, enabling first entrant entrepreneurs to raise money and build expertis, leading them towards additional future funding or buy-out. Ms Das has more than thirty years experience in the critical early stages of startups – with skilled emphasis on creation, management, business development, marketing and sales.
Most recently, Durga acquired the rights and technologies and has launched a water solution company called TEERTHAA. The technology is to deliver water from atmospheric moisture.
DAS STAR began in 2012 and launched WASSUP, a pioneer and well-known leader in the laundry space, an enterprise video platform called CHEHARA and SUPRA a Bangalore based LED lighting company.
A continuous initiator of revenue generating concepts, she possesses an innate understanding of the market pulse at ground level. All her previous companies have been successfully acquired; a testimony to an amazing track record of her strengths in creation, management and development of valuable startups.
When not hitting homeruns in the business world, Durga is very passionate about sports. She loves to travel and is a Rotarian, a passionate golfer and an avid Sailor. She rides a Harley Fat Bob on weekends.
Durga has an impressive record of serving the sport of cricket at different levels throughout her 40-year association with the game and believes “Cricket builds character,”. She was the captain of the USA Women’s team in 2010 that won the ICC Americas Cup, and a player on the 2011 US national team in the ICC Women’s Cricket World Cup Qualifier in Bangladesh. Durga is well-respected and admired in cricket circles around the world