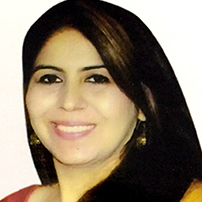 Vijay Rani Rajpal, M.Sc, M.Phil, Ph.D, is a Plant-Geneticist and Molecular Biologist at Hansraj College, University of Delhi. She obtained her M.Phil and Ph.D. degree in Botany specializing in Genetics and Molecular Biology from Delhi University. She has been teaching theory and practical courses in Genetics, Cell Biology, Molecular Biology and Biotechnology to undergraduate students of B.Sc (Hons) Botany and B.Sc (Prog) Life Sciences since 1996.
Her research domains include Cytogenetics, Molecular markers application, Population genetic analysis and Phylogenetics. Dr Rajpal conducted cytogenetical and biochemical research to understand the genetic differentiation of species in the genus Medicago an important forage species for her M.Phil thesis. For her doctoral work, she for the first time, showed the usefulness of molecular DNA markers in detecting somaclonal variation in the micropropagated plants of Populus deltoides clones, Eucalyptus tereticornis and E.camaldulensis. Her work is considered as a landmark that stressed upon the importance of analysis of genetic fidelity of micropropagated plants derived from every micropropagation protocol even based upon organized meristem cultures before it is approved and released for commercial multiplications. She showed the incidence of somaclonal variation at DNA sequence level with a series of papers that she published on the genetic analysis of plants derived through enhanced axillary branching cultures in five clones of Populus deltoides, Eucalyptus tereticornis, E. camaldulensis, Coffea arabica, and Camellia sinensis. Simultaneously, she has been working on the Population genetic analysis and molecular phylogenetical studies in the genera Arachis, Carthamus, and medicinal