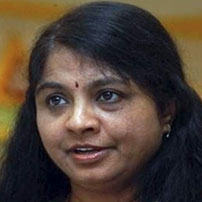 Physician, endocrinology and diabetes specialist, medical ethics expert, great communicator, women’s health promoter, women’s rights activist, founder of Diwwaaas and Director of Aceerhealth.
Dr Usha’s education in medicine began in the prestigious Madras Medical College where she excelled in academics garnering gold medals and certificates of honour. She credits her strong foundation in clinical medicine to her outstanding and inspiring teachers at the Madras Medical College.
She continued her training in Internal Medicine and Endocrinology and Metabolism in outstanding training programs in the US and obtained her American Board certification in both Internal Medicine and her specialty Endocrinology- Diabetes- Metabolism. She also completed her graduate training in Medical ethics, a lifelong passion of hers. She received the Otto Schwartz teacher of the year award in the first year she began her career.
She returned to Chennai, India with her young family and began a career that has been nothing short of brilliant and meaningful. She has been an invited speaker in hundreds of conferences and has been active in capacity building of physicians and in community education programs.
In 2001, Dr Usha began her research activities and has been the principal investigator for numerous trials on osteoporosis, diabetes, paediatric endocrinology in addition to her own initiatives on gestational diabetes, osteoporosis, childhood obesity and polycystic ovary syndrome.
Dr Sriram was appointed to the global scientific advisory board of Pfizer’s osteoporosis PEARL study and subsequently authored the results of the study Further studies on osteoporosis allowed her to be a part of all the emerging therapies for osteoporosis [ Lasofoxifene, Arzofoxifene, Denosumab, Parathyroid hormoneCAthepsin K inhibitors and Sclerostin inhibitors]
Dr Usha has been the executive committee member of the Indian Society for bone and mineral research [ISBMR] for over a decade and last year became the vice president of the society.
Physician education has been a core commitment for her. She has organized dozens of professional programs, the most notable being ICARDIA, REPRO, ENDIA 2011Endopro, PACE 2015, Diwaas 2016
Women’s reproductive health has been an area of expertise and interest of hers since she began her fellowship in endocrinology. Her belief that women’s life course has great impact on all aspects of their health [mental, physical] has been a guiding principle in her approach to women’s health issues. She started at the Kalyani medical centre [ the oldest and most revered institution for all things related to women’s health] has shaped her thinking and helped her to focus on critical issues like gestational diabetes, polycystic ovary syndrome, menopause and non-communicable diseases in women.
The Indian menopause society established the Chennai chapter with Dr Sriram playing a key role. She continues to speak to women’s groups about managing menopause and the post menopausal years equipped with information, coping skills, courage and grace.
In 2011 after 25 years as an endocrinologist, she began her most precious and most path breaking work on opening windows of opportunity for prevention and care of Diabetes in Women and Girls. The problem of diabetes and other non-communicable diseases are rising fast and furiously among girls and women and compromising their lives, livelihood and quality of life and many other aspects of their life. After months of intense brainstorming with colleagues, she launched Diwwaaas on Sep 14 2013. Attended by hundreds of women and headlined by Ms Kiran Mazumdar Shaw, it marked the beginning of a large nationwide movement to build understanding the scope of the problem of diabetes and its impact on women, to raise awareness among girls and women about diabetes and provide helpful tips on prevention and management.
By July2016, Diwwaaas had trained 1000 women physicians on the nuances of diabetes care, prevention of complications and provided them with toolkits to do community awareness. These physicians have reached out to girls and women in their respective communities and continuing the work of awareness and advocacy.
The newest and extremely important and vital program that is being developed by Dr Usha is a checklist for women who are planning a pregnancy called Fit2bemom. We are increasingly becoming aware that the first 1000 days and particularly the first 9 months of a person’s life will shape their health for life. The young women of today in their reproductive years have many health issues due to changing lifestyles, urbanization, globalization and stresses of modern living. This makes them particularly susceptible to diabetes, high blood pressure, overweight and obesity, depression and many develop complications during their pregnancy. Babies are being born preterm and with low birth weight which is compromising their future health seriously.
Fit2be mom will target adolescent girls, college girls, young working women and any woman who is in her reproductive years. A coalition is being formed with jewellers, saree retailers, wedding planners, caterers, cosmetics people, baby product makers, medical community, pharma industry [ contraceptive s, diabetes medications, blood pressure medicines, thyroid, calcium and vitamin D, prenatal vitamins, vaccines etc.] who will spread the message of preconception care, its importance and the tools.

Dr Usha Sriram has been a strong voice for women’s health and empowerment and she believes that her work has just begun and much needs to be done. Her north star has always been her belief that all women have the power to create, nurture and transform and their productivity and their contributions to family and society should not be compromised by poor health.
A career in medicine is not just a profession but a calling and has the power to allow us to touch lives in the most amazing and most meaningful way possible and is truly a blessing to be able to be a part of someone’s life and be of some help and comfort during their most vulnerable times. This has always been Dr Usha’s message to students and young colleagues.