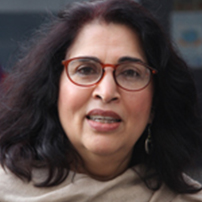 Dr Urvashi Sahni is a social entrepreneur, women rights activist and educationist. Through her various organizations, she has been working for the rights of children and women for over three decades. She is a leading expert in school governance, curriculum reform and teacher training with a special focus on girls’ education and the use of technology in education.
She founded Suraksha, a women rights organisation, in 1983 in Uttar Pradesh, India. She is the founding President and CEO of the Study Hall Educational Foundation, under which she has established three K-12 schools including Prerna Girls School, providing affordable high quality rights-based education to over 1000 girls from urban slums.SHEF directly provides education to over 4000 students including middle class urban children, disadvantaged girls and boys from poor areas, out-of-school children, and rural children. She is the co-founder and director of the Digital Study Hall, which extends the pedagogical practices developed by the foundation to rural and urban schools in Uttar Pradesh and reaches out to over 1,00,000 students and teachers. A prolific social entrepreneur, Dr Sahni also founded DiDi’s, a social enterprise generating sustainable livelihoods for women, where she employs 65 Prerna graduates and their mothers. She is also a member of the sub-committee on school education of the Chief Minister’s Advisory Council in Rajasthan.
Dr Sahni is a Non-resident Fellow at the Center for Universal Education at the Brookings Institution. She was awarded the Ashoka Fellowship in the year 2011. She received Berkeley’s Haas International Award for her efforts to reform education in India and bolster education for girls in the year1994. Dr Sahni was also invited to be an honorary member of the Clinton Global Initiative and is now a member of Hillary Clinton’s CHARGE commitment to ensure that more girls complete secondary education around the world.
She has a Masters and a PhD in Education from the Graduate School of Education in UC Berkeley. She has presented academic papers at many national and international forums and universities, including Columbia, NYU, Chicago, and Berkeley, and has given Keynote addresses at international drama and education conferences in Edinburgh, Jamaica, Plymouth, Toronto, Northern Ireland and New York. She has published extensively on Critical Pedagogy, Theatre in Education, Feminist Pedagogy, Child Cultures, and Girls’ Education and Empowerment. Her current research focuses on developing and scaling her Girls’ Empowerment Program in India with the help of curricular reform, teacher training, and affordable technology. Her latest book – Reaching for the Sky: Empowering Girls Through Education – draws on her 14 years of work with Prerna Girls School, and argues that education can be truly transformative if it addresses the everyday reality of girls’ lives and responds to their special needs and challenges with respect and care. She was recently declared the Social Entrepreneur of the Year India, 2017 by the Schwab-Jubilant Bhartiya Foundation.