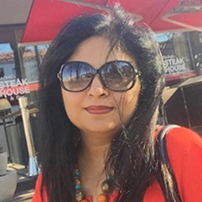 Associate Professor in the Department of English Journalism at IIMC

Dr Surbhi Dahiya is presently working as Course Director and Associate Professor in the Department of English Journalism at IIMC (under Ministry of Information and Broadcasting, Government of India). She also holds the responsibility of Dean Students Welfare. Previously, she was holding the charge of Course Director, Department of Advertising and Public Relations at IIMC and was a member of Executive Council and IIMC Society. She started her career as a correspondent with The Tribune. She also worked with an Ad agency as a media planner and later shifted to academics in 2003.

Dr Dahiya was the SUSI Scholar from India in the year 2017. She studied Journalism at Ohio University and was also certified from The US State Department. She studied and visited various US Media Institutes and Media houses like CNN, National Geographic etc. Shje also participated in AEJMC Conference at Chicago in 2017. She wasw elected as the Liason Chair for Academia and Industry by the newly formed south Asian Communication Association ( SACA). She has been invited to present Power Research Talk in ICA to be held at Prague, Czech republic from 24th-28th May 2018.

She was an invited delegate for a roundtable workshop conducted by ESRC and ICSSR on social media research held in Jan 2015 at London. She was a UNESCO panelist on Safety of Journalists in Montreal, and Paper presenter and reviewer at JRE and Political Economy section at IAMCR held in Canada from 12-16 July 2015. She presented a paper in AMIC conference at AUD, Dubai in June 2015. She presented on Safety of Indian Journalists on the World Press Freedom Day on 3rd May 2016 at Helsinki, Finland in a conference jointly organized by UNESCO and the Government of Finland and the UNESCO Chair at University of Gothenburg, in cooperation with IAMCR, University of Sheffield, University of Tampere and University of Helsinki at the Finlandia Hall in Helsinki (Finland) from 2nd to 4th May 2016. She Chaired a session on “Journalism Education” and presented a paper on “Ethical Issues in Journalism” at IAMCR conference held from 27th July to 31st July 2016 at Leicester, UK. She was a reviewer for 2nd Annual MEDCOM conference in April, 2016, Bangkok and World Journalism Education Congress in July 2016 at Auckland, New Zealand. In the last two years she published two papers in International Journals. She has organised a number of conferences as a convener or member of the organising committee. She has also presented a number of papers in National and International conferences. She has many published papers in National and International journals and chapters to her credit.

She has delivered various special lectures at various Universities, CEC, Delhi Judicial Academy, for officials of Defence services, Indian Forest Services, Health and family welfare, Field Publicity officers etc. She was a committee member for developing India’s Global Media Plan for Print, Electronic and Online Media budget for Ministry of Tourism, Govt. of India and a Technical Evaluation Committee Member in India Brand Equity Foundation, Ministry of Commerce as well as Technical Committee Member for Department of Industrial Policy and Promotion for selection of Creative agency for Start ups India. She was also a Jury Member for selecting Comprehensive Financial Inclusion Plan in Department of Financial Services, Department of Finance, Govt. of India. She was an invited Jury Member in Aakashwani for selection of National Awards, 2013 and 2014.

She was a Resource Person for various workshops and seminars like UNICEF and Guwahati University’s workshop on Social and Behaviour Change Communication through Folk Art organised in Sept.2016; V.V. Giri National Labour Institute’s workshop ( Ministry of Labour and Employment), in April 2016; Gujarat Vidyapeeth, Ahmedabad in Jan, 2016 etc. She was invited by Chhattisgarh state Child Rights Protection Commission, Mahila Samanwaya and Khushabhau Thakre University of Journalism as a Resource Person. She was an invited delegate at Simhasta International Conference, Kumbh, Ujjain.

Academically, she is a Gold medalist in graduation and studied with scholarship and fee waiver throughout. She holds a Ph. D degree in Media studies. Her thesis was on “Media Management in the Global Scenario: A study of the Changing Management Practices in Media.” Her major interest areas are Media management and ownership issues, Reporting and safety of Journalists. She has also taught subjects like Communication Theory, Communication and (social) Media Research and Advertising.

Previously, she worked as an Assistant Prof. in the Department of Journalism, Delhi College of Arts and Commerce (DCAC), University of Delhi. She also headed the Department for two years (2008-2010). She was the Convener of the Academic Executive Committee of DCAC. She served as an Associate Editor and Coordinator for Research Journal Intellectual Resonance- DCAC Journal of Interdisciplinary Studies (ISSN 2321-2594). She was appointed Co-ordinator of the Syllabus Revision Committee of BA (Honours) Journalism, University of Delhi in 2009 and also convened the Syllabus Revision for four papers in 2013. She was also the Student Union Advisor for the year 2011-12.

She also served as Programme Co-ordinator and taught as an Assistant Prof. in various colleges associated with GGSIPU, Delhi. She launched a newspaper Youngster, for which she worked as an Associate Editor and then Editor, registered with RNI (RNI No. DEL/ BIL/2004/14598). She is an expert committee member, external examiner, moderator and observer for many Indian Universities.