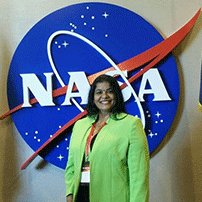 An Educational, Cultural and Travel ambassador for kids, Dr. Srimathy triggered her launch pad Space Kidz India (“SKI”) in [July 2011]. As the CEO of this prestigious organization, Dr. Srimathy has designed numerous programs to channel young minds.
An educational evangelist with a mission to disrupt the mundane culture in the Indian educational system, Dr. Srimathy through her programs, has opened the doors to an untapped avenue called “Space Education”. Her ultimate goal is to produce World renowned Scientists through her Aero Space research University she dreams to build one day.
SKI has designed a life changing path for 1500 kids from India and Nigeria to the pinnacle of Space education, NASA. Cosmonaut Shalizan Sharipov (Director of Yuri Gagarin Space Centre, Moscow) and Astronaut Marsha Ivins (NASA) were invited by SKI to India to meet with Indian students, apart from Retd. Wing Commander Rakesh Sharma – Hero of Soviet Union, Space traveler and only Indian Cosmonaut to share their experiences about living in space. SKI is the proud host of the esteemed annual contest called the “Young Scientist”, a unique avenue to promote innovations in the field of Science and Technology. SKI has recently collaborated with the “Young Scientist” alumni and undertaken some huge initiatives in the field of Science and Technology. “NSLV – KALAM 1”, one of a kind first “Near Space Vehicle” to be launched in India. Partnering with Moody Space Center, Australia to launch the first ever Indo-Australian Cube Satellite in 2017.
1st time in the World, Space Kidz India team has invented a “World Smallest and Lightest Satellite”, and fully 3D printed. It is a 3.8cm Cube Satellite (Femto Category) weighing 64gms (including the plastic cube provided by CiS). Being an Mission Director of Kalam Sat, Dr.Srimathy Kesan plays an inevitable role in designing the KALAM SAT. It is recognized in Asia Book of Records, URF Book of Records, India Book of Records, Assist Book of Record and Congratulatory messages, Recognition from Space Agencies, School, College, Universities and Political parties all over the Globe.