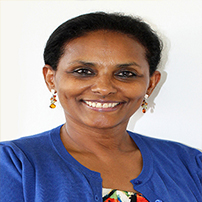 Dr. Segenet Kelemu is the Director General of the International Center of Insect Physiology and Ecology (icipe) Nairobi, Kenya. She is the fourth Chief Executive Officer, and the first woman to lead icipe. Dr. Kelemu (a native of Ethiopia) is a molecular plant pathologist with emphasis on elucidation of molecular determinants of host-pathogen interactions, development of novel plant disease control strategies including genetic engineering, biopesticides, pathogen population genetics and dynamics, endophytic microbes and their role in plant development. She has experienced the challenges and successes associated with African agriculture first-hand, from tending the field to directing a world-class laboratories.
Following her post-doctoral work at Cornell University, USA, Dr. Kelemu joined the International Center for Tropical Agriculture (CIAT) as a Senior Scientist in 1992. She was later appointed Leader of Crop and Agroecosystem Health Management at CIAT until her departure in August, 2007, to become Director of the Biosciences eastern and central Africa (BecA) Hub. CIAT recognized her numerous contributions to the centre and its mission with the Outstanding Senior Scientist Award. After twenty-five years of studying and successfully applying cutting-edge science outside of Africa, Dr. Kelemu returned from the diaspora to contribute to Africa’s development. In 2007, she became the Director of the Biosciences eastern and central Africa (BecA) Hub at the International Livestock Research Institute, Nairobi, Kenya. Under her leadership, the BecA initiative has transformed from a contentious idea into a driving force that is changing the face of African biosciences. BecA’s research capacity, staff, facilities, funding, partners and training programs have expanded at an ever accelerating pace. She has assembled and inspired a scientific and technical team bound by a common passion for using science to enhance Africa’s biosciences development. Prior to becoming the Director General of icipe, she has been the Vice President for Programs at the Alliance for a Green Revolution in Africa (AGRA) for about a year. She is one of the five Laureates of the 2014 L’Oréal-UNESCO for Women in Science Awards. She is also one of the 2013 elected Fellows of the African Academy of Sciences. Segenet is one of the top 100 most influential African women listed and featured in the May 2014 Edition of Forbes Africa. More recently, Dr. Kelemu has been listed in the 10 most influential African women in agriculture by the Journal of Gender, Agriculture and Food Security (AgriGender Journal). She has also received other awards, including the prestigious Friendship Award granted by the People’s Republic of China. The award is granted to foreign experts who have made outstanding contributions to China’s economic and social development. The Academy of Sciences for the Developing World (TWAS) awarded the 2011 TWAS Prize for Agricultural Sciences jointly to Dr. Segenet Kelemu and Prof. Zia Khan. She is the first African to win the prize for Agricultural Sciences since its inception. TWAS Prizes are awarded to individual scientists in developing countries in recognition of an outstanding contribution to knowledge in eight fields of science: agricultural sciences, biology, chemistry, earth sciences, engineering sciences, mathematics, medical sciences and physics. In 2013, The African Academy of Sciences has honored and recognized Dr. Kelemu as a Fellow for her outstanding contributions to the advancement of Sciences in Africa. At the 26th General Meeting of
TWAS held in Vienna, Austria, 19 November 2015, the Members attending the meeting have elected Dr. Kelemu as a Fellow of ‘The World Academy of Sciences (TWAS) for the advancement of science in developing countries. Dr. Kelemu was invited by the United Nations Secretary-General Ban Ki-moon and Director-General Irina Bokova of the UN Educational Scientific and Cultural Organization (UNESCO) to serve on the UN University (UNU) Governing Council as from May 2016.
Dr. Kelemu was selected to receive an honorary doctorate by Tel Aviv University in May 2016 in recognition of her pioneering role for women scientists in Africa, her leadership in the fight for providing new solutions for ecologically responsible food crop production, especially by local, small-scale farmers in Africa; her commitment in directing the major effort, through international collaboration, for the transformation of African agriculture into self-sustainment that will meet the goals of feeding the people; her international acclaim as recipient of prestigious awards such as the UNESCO Award for Women in Science in 2014, and her serving on advisory boards of key international institutions such as Gates Foundation, Canadian International Food Security Research Fund, and her support in the establishment of the Manna Center Program in Food Safety and Security of Tel Aviv University. By her acceptance of the honorary doctorate of Tel Aviv University she would be joining a distinguished list of honorees that includes Bill Clinton, Angela Merkel, Tony Blair, Shimon Peres, Elie Wiesel, Alan Dershowitz, Amos Oz, Umberto Eco, Zubin Mehta, Ronnie Chan and Maurice Levy, among the many remarkable individuals who have received this honorary degree in the last 50 years. Dr. Kelemu has published widely in refereed journals, book chapters, manuals, conference/workshop papers, working documents, and others. She has served on a number of Governing Boards, Technical Advisory Panels and Steering Committees of key organizations and major science and technology initiatives. In addition, she has served on a number of international award jury and selection panels. She is currently a member of the CGIAR Independent Science and Partnership Council. Dr. Kelemu is a highly skilled fund-raiser and is an innate teacher and has supervised and mentored a number of BSc, MSc, and Ph.D. students.