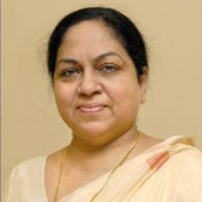 Dr. Mrs. Sara George, Ph.D, M.Sc., B.Ed., is an outstanding academician and an experienced leader. Born and educated in Kerala, Dr. Mrs. George completed her post-graduation from the prestigious St. Teresa’s College Cochin. She was conferred an honorary Doctorate by the Open International University, Colombo for her distinguished contribution to the cause of education. Dr. Mrs. Sara George took over as the Principal of St George’s School, New Delhi in 1982, which at that time had branches at Greater Kailash and Defence Colony. From its position in 1982 to its present status of being one of the best schools in Delhi, the school has witnessed a tremendous change. All this has been possible only due to the dedicated and untiring efforts of Dr. George. It has been under her aegis that a small and relatively unknown institution of the early 80’s has become a name to reckon with in the field of education in Delhi. In the words of the Principal, Dr. Sara George, “Each child is as important to us as if he or she were our own. We are not interested in academic statistics alone. We are interested in ensuring that each of our children realises his or her full potential in the lines that he or she has aptitude in and becomes a well moulded, patriotic citizen that India can be proud of’.
Dr. Mrs. Sara George has always been a very religious and socially conscious person. She is an active member of the Orthodox Church of India and has been a member of several important committees at the local and diocesan levels. She has also been an active member of YWCA of Delhi where she was the Vice President and member of several committees from time to time. Dr. George has been an active Rotarian since 1973 and has been instrumental in organizing many events. She has also been associated with the Y’s Men’s International Club where she was the First Lady of the district in the year 1989.