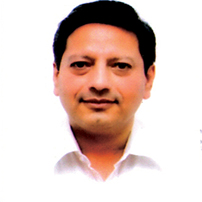 Dr Sanjeev Chopra currently posted,as Additional Chief Secretary to the Government of West Bengal in the apex scale of the IAS is an officer of the 1985 batch with significant laurels in professional, academic and literary circles.

In his present assignment, he is responsible for planning and implementation of the entire spectrum of development interventions in the state – from agriculture and allied sectors to watershed, livelihoods and farmers incomes, besides protocol and related assignments. Under his stewardship, the state has won the KRISHI Karman Award for the fourth successive year from the Government of India. He is also involved in training officers of the All India, State and Agriculture and allied departments on governance and development interventions, besides giving the governmentperspective to visiting diplomats and participants of programs like NDC, World Bank and other multi lateral and bi lateral agencies .

Prior to this assignment, he was the Mission Director for the National Horticulture Mission and the National Mission on Micro Irrigation and managing Director of the Nafed and National Horticulture Board under the Government of India at New Delhi. He was also responsible for international co-operation in the agriculture sector. He was the head of the APCC under ESCAP of the United Nations for the year 2014-15. He was on the faculty of the LBS National Academy of Adminstration from 1996 to 2001, and with the Government of Uttarakhand from 2002 to 2007. He has held important field postings in Bengal as DM of Murshidabad, ADM of Cooch Behar and SDM of Kalimpong .

Dr Chopra is often called to various national and international forums to deliver keynote address on issues concerningIndia’s agriculture and food security regime. He has spoken at PRIO, Oslo, Gulf Co-operation Council, Abu Dhabi, ICA conference at Hanoi, Westminster Hall,London, besides FAO conferences at Rome and the G20 Agriculture Forum at Ankara. He has collaborated with theInstitute of Defence Studies and Analysis on looking at India’s strategic role in the global food security debate.

Dr Chopra has authored /edited over ten books, and his columns have been published in The Economic Times, The Times of India, Pioneer, Tribune, Millennium Post, Encounter, Mainsream and Economic and Political weekly, among others. He is a versatile reader, and is actively engaged in curating literature festivals in Mussorie, Dehradun, Kolkata, Kalimpong and CSOI New Delhi.

Besides degrees in Law, management, history and literature, Dr Chopra is the recipient of the Robert S McNamara Fellowship of the World Bank, the Hubert H Humphrey Fellowship at Cornell, Guest Scholar at The Brookings Institution and the Twenty First century Trust Fellowship at Merton College Oxford.