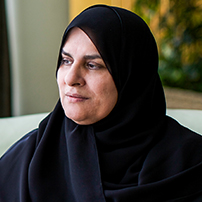 Dr. Raja Al Gurg is a leading business woman in her own right, who has carved a unique niche for herself in the region due to her support and encouragement of Arab women entrepreneurs. She is the Managing Director of Easa Saleh Al Gurg Group LLC, a multifaceted business conglomerate; the President of Dubai Business Women Council; Vice Chairperson of the Board of Directors, Dubai Healthcare City Authority; Board member of the Dubai Chamber Of Commerce & Industry (DCCI) and Dubai Women’s Association. Dr Al Gurg is the first Emirati woman on the board of HSBC Bank Middle East Limited and is also on the advisory board of Coutts Bank, the wealth division of the Royal Bank of Scotland Group. She is the Head of the Auditing Committee at the Federal Customs Authority and a Board member. Dr Al Gurg is also on the Board of Trustees for the Mohammed Bin Rashid Al Maktoum Global Initiatives – one of the largest development and community foundations in the Middle East. She is also Vice Chairperson, Board of Trustees, for the Mohammad Bin Rashid University of Medicine and Health Sciences and a member of the Board of Governors of the Hamdan Bin Mohammed Smart University. Dr Raja Al Gurg is the Chairperson of the Board of Directors of Al Jalila Foundation, a non-profit organisation whose mandate is to promote the UAE as a centre of excellence for medical research and education. Dr Raja Easa Al Gurg has been ranked the most powerful Emirati Businesswoman in Forbes Middle East’s 2017 ranking and the third most influential businesswoman in the Arab world in Forbes Middle East’s 100 Most Powerful Arab Businesswomen for 2017 ranking. She features in the 29th spot in the listing of the 100 Most Powerful Arabs, compiled by Gulf Business magazine in 2017. She was listed 91st among ‘The World’s 100 Most Powerful Women’ by Forbes for 2016.