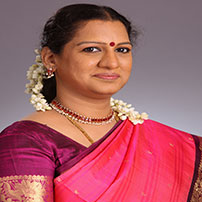 Dr.Radha Bhaskar is a unique combination of a vocal musician, musicologist, journalist, cultural organizer and educator.
Dr.Radha is a disciple of Padma Bhushan Sri.P.S.Narayanaswamy and has performed many vocal concerts in prestigious sabhas all over India and abroad. In recognition of her yeoman contribution to music, she has received several coveted titles like Kala Seva Bharathi, Yuvakala Bharathi, Sangeetha Sudhaamayi, Sangeetha Kalasevak, Ganaamrutha Rathna, Sangeetha Sevamani, Sangeetha Kala Bharathy, Acharya Award, Sabha Bhairavi, Sparkling Diamond Award, Best Teacher award etc. She received the best musicologist award from Narada Gana Sabha, Chennai. She was conferred the “Women of Excellence” award and honoured by the Confederation of Women Entrepreneurs (COWE).She also received the Musical Excellence award from Sivan Fine arts academy & Narada Gana Sabha.
Recently, she was invited by the Sangeet Natak Akademi, Ministry of Culture, New Delhi to conduct a two days workshop on “Appreciating Karnatic Music.”
Dr.Radha had the rare privilege of training and conducting a spectacular group singing programme by 5,000 school children from about 100 schools in October 2004 at the University Centenary auditorium, Chennai in the presence of the former President of India, His Excellency Dr.A.P.J.Abdul Kalam. In 2015, she organized yet another group singing by 1000 children from 50 schools. In 2016 & 2018, she also coordinated a marathon “Ganathon” congregational singing programme featuring 10,000 girls from various schools and colleges.
Radha holds a doctorate degree in music for her thesis- “Karnatic Music Concerts – an analytical study and was a recipient of the Junior Research Fellowship from UGC to pursue her research. She also received the Junior Fellowship from the Ministry of Culture, Govt. of India for a research project. She has given many lecture demonstrations and also participated in several prestigious panel discussions all over India. Recently, she was awarded a Production Grant from the Ministry of Culture, Government of India for a project titled “Sangeetha Saurabha.”
For the past 12 years, Radha is the Editor of the prestigious art magazine Samudhra which has carved a niche for itself in the fine arts field. This magazine with its noteworthy articles and interviews of eminent personalities in the art field has won wide acclaim. Earlier, Dr.Radha had been a music critic for Indian Express (under the pen name Bharani) and contributed several noteworthy reviews and articles. In 2015, the magazine was awarded the “Sathya Patrika Sundaram” title by Bharathanjali Trust.
Radha is also the Treasurer of the unique 20 year old cultural organization Mudhra, noted for its novel and purposeful programmes. Mudhra has achieved many milestones through its innovative and fresh approach to fine arts. It has not only conducted programmes of music and dance but also devised many unique concepts to encompass more people into the fold of fine arts and help them appreciate the arts better. These include workshops in music for rasikas as well as students, teaching music in Corporation Schools, conducting music quiz in schools, seminars and panel discussions etc. She has also been convener for several National Conferences conducted by Mudhra.
Dr.Radha has been sharing her music knowledge and experience by conducting special Music Appreciation Programmes to enlighten rasikas and students about the nuances of Indian Classical music. To generate interest among children about Indian classical music, Radha conducts regular workshops in schools. So far, about 10,000 people have attended this programme. She has also been presenting thematic concerts in sabhas on various technical aspects of music like Raga Vaibhavam, Trimurthy Vaibhavam, Sri Thyagraja Sangeetha Anubhavam, Mudhras in Music, Talas in Karnatic Music, Contribution of various composers, Compositional genres, Manodharma in Karnatic Music etc.
She was invited by the Embassy of India, Muscat as well as organizations in USA, Singapore and Malaysia to conduct workshops.
Dr.Radha has released the first ever DVD on Music Appreciation titled “Introduction to Music” and CDs “Appreciating Varnam to Tillana” & “Raga Vaibhavam” for rasikas.
Dr.Radha has served as an Expert Member in the Ministry of Culture, Government of India. She has also been a Member of the Board of Studies of Indian Music at Madras University and Annamalai University. She was sponsored by the Rotary International as part of their Group Study Exchange Programme to visit Arizona, USA.