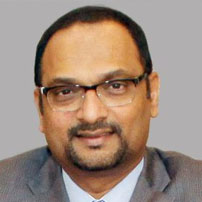 Dr. P. V. Ramana Murthy is the Sr. Vice President and Global Head – Human Resources at the Indian Hotels Company Ltd. Prior to this, he held a distinguished 15-year career with The Coca-Cola Company, where most recently he served as Executive Director – Human Resources for Hindustan Coca-Cola Beverages (HCCB), India and Bangladesh, the wholly owned subsidiary of the Bottling Investments Group of The Coca-Cola Company, Atlanta, USA. In this board level position at corporate headquarters in Gurgaon, he was responsible for about 15,000 employees. Under his guidance, the Human Resources function of HCCB came to be named “Best in Class” and served as a strong exporter of executive talent within the global Coca-Cola Bottling Investment Group.

Among his many notable achievements for Hindustan Coca-Cola were creating an 18-month customized General Management Development Program to groom zonal business heads in India, developing and deploying an HR Academy with an 18-month HR Capability Building Program, and designing Leadership Excellence and Accelerating Performance (LEAP) for mid-level manager development, now in use in 17 countries of Coca-Cola’s Bottling Investment Group (BIG). He also conceptualized and launched the first-ever Community College in India in partnership with Mumbai University to develop frontline sales talent.

In his career spanning about 28 years, PV widely travelled across the globe and did short-term assignments in countries such as Denmark, Sweden, Romania, Brazil, China, Philippines etc., understanding different cultures and learning the country specific management practices.

His prior experience includes six years as head of Human Resources for Bellary Steels and Alloys Ltd, Karnataka, India, where he was responsible for strategic HR management and employee relations for four business units. He began his career in HR in 1985 with Ferro Alloys Corporation Ltd. (FACOR), Shreeram Nagar, Andhra Pradesh, India. Joining as a Management Trainee in Personnel & Administration, he subsequently held the Assistant Manager – Personnel & Administration and Deputy Manager – Human Resources positions in FACOR.

PV, who is regarded as an ‘academic practitioner’ within the HR circles, holds a Ph.D. in Strategic Human Resource Management from Sri Krishadevaraya University, Andhra Pradesh, India. He has also done an advanced Human Resource Executive programme from Michigan Ross School of Business in 2009. PV has also recently acquired the psychoanalytical skills on Leadership, Culture and Organization development through his Executive Masters in Coaching and Consulting for Change (CCC) from INSEAD, Singapore. Apart from this, he has done a one-year Practitioner Coach Diploma from Noble Manhattan Coaching Institute, London; and a post-graduate diploma in Personnel Management from National Institute of Personnel Management (NIPM), Calcutta, India. He is also a 1984 Graduate in Law from Andhra University, India, and a 1981 Graduate in Commerce from the same university.