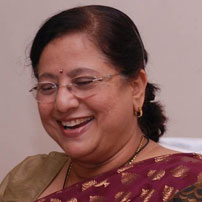 • First and only lady in India to be qualified and practicing as both Neurophysician and Neurosurgeon
• Initiated comprehensive services for epilepsy in Chennai in 1994 by starting EPICENTRE (Epilepsy Institute & Centre for Treatment, Training, Research & Education)
• Introduced the first video EEG service in the private sector in the whole of South India in 1994
• Started the epilepsy surgery program in Apollo hospitals in 1998
• Only PhD guide in Apollo hospital – have guided 5 students to date, all have completed successfully
• Took charge of and set up the medical library at Apollo hospital between 1984 and 2002

AWARDS & HONOURS
• 1982- Kshanika Oration Award Indian Council for Medical Research (ICMR) national award for outstanding Woman scientist of the year below the age of 35
• 1982 – Invited author in specialised textbooks in USA & India as below “Aphasia in a multilingual society – a preliminary study” Chapter in the book “Language processing in bilinguals: Psycholinguistic & Neuropsychological perspectives” Ed. J.Vaid, Lawrence Erlbaum Associates, published in 1986
• 1993 – L.V.Ramiah award for being the first & only lady in India to be both Neurophysician & Neurosurgeon & for contributions in the field of Medicine
• 1998 – “Stree Ratna” award for constructive contribution to the nation in the field of Neurosciences by the Bharatiya Vidya Bhavan