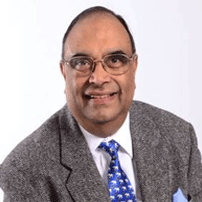 Dr Paul Sabapathy CVO CBE was born in Chennai in India, in 1942 and completed his schooling at the famous public school, Lawrence School Lovedale. He then did his first degree at one of India’s oldest and leading Colleges Madras Christian College.
He moved to the UK in 1964. He completed a Masters Degree from Aston University and qualified as a Chartered Management Accountant and Chartered Global Management Accountant, becoming a British citizen in 1984.
He joined IMI plc in 1968 as its first non white Management Trainee and after 6 years was the youngest Finance Director at the age of 31 at one of the largest subsidiaries IMI Refiners in Walsall producing 200,000 tonnes of copper a year.
After a 28-year career in industry holding senior positions with IMI plc, and retiring as Assistant Managing Director of IMI Titanium in 1996, one of IMI plc largest companies he became the Chief Executive of North Birmingham Community NHS Trust, serving until 2000.
He also served on the Boards of National Blood Authority and Standards Board for England, Chairing their Finance Committees.
He was Chairman of Birmingham East and North NHS Primary Care Trust for 8 years.The PCT was judged one of the best PCTs in the country. He served on the Boards of both Black Country and Birmingham Heartlands Development Corporations Chairing their Finance Committees. He was a Governor of The Royal Orthopaedic Hospital NHS Foundation Trust and a former Trustee of the world famous Bournville Village Trust.
He was awarded the OBE for services to urban regeneration in 1995. In 2004 he was awarded a CBE for services to business and education in the West Midlands.
He was awarded the prestigious Lunar Society Medal for his outstanding contribution to public life.
He has received Honorary Doctorates from Aston University, where he graduated as first batch of Aston Business School , Birmingham City University where he was the first ever non white Chairman of a British University and University of Birmingham.
Paul was appointed as the first non-white Lord- Lieutenant in 2007 and held this post until September 2015.
In October 2017 in recognition of his outstanding services as Lord-Lieutenant of West Midlands Her Majesty the Queen bestowed her personal recognition by conferring on him the prestigious and rare Commander of the Royal Victorisn Order.
Paul is married and recently lost his wife Win after 48 years of happy married life in Sutton Coldfield and is a passionate Brummie
Paul has two grown up married children John who is a prize-winning Medieval Historian at UCL who won the best History book from Royal Historical Society in 2015. John is married to Kate who he met at Oxford and they have a son and a daughter and live in Blackheath in London.
Pauls daughter Hannah went to Edinburgh University to do a Masters in English, where she met her husband Sion. She also has a Masters in Textile Design with distinction from Royal College of Art. Hannah lives with her artist husband Sion and her two daughters and one son in Dundee..