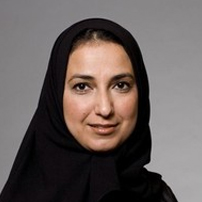 Dr Nawal Al-Hosany is the Permanent Representative of the UAE to the International Renewable Energy Agency (IRENA) and also holds the position of Deputy Director General of the Emirates Diplomatic Academy (EDA), since October 2017. At EDA, she contributes to the realisation of the Academy’s mandate; to equip the UAE’s current and future diplomats with the relevant knowledge and multi-disciplinary skills to effectively serve their nation.
Dr Al-Hosany’s career spans business and academia, both in the UAE and internationally. She currently serves as a Board member of the newly formed Khalifa University of Science and Technology, and a board member of the Graphene Engineering Innovation Centre Project Committee at the University of Manchester, UK.
Prior to this, she was Director of Sustainability at Masdar, Abu Dhabi’s renewable energy company, and Director of Zayed Future Energy Prize, the UAE’s annual global awards for renewable energy and sustainability.
Dr Al-Hosany believes passionately in the leading role that women can play in responding to global sustainability and climate change challenges. She has been Programme Director of the UAE-led Women in Sustainability, Environment and Renewable Energy (WiSER) initiative since its formation in 2015.
Highly regarded for her expert counsel, she has been invited to sit on several boards and intergovernmental bodies, including the Advisory Panel for the Momentum for Change initiative of the United Nations Framework Convention on Climate Change (UNFCCC), the Troika Plus of Women Leaders on Gender and Climate Change, and the Energy Efficiency Global Forum. She also served as Sherpa to the UN Secretary General High Level Group for ‘The Sustainable Energy for All’ initiative for its then Principle, His Excellency Dr Sultan Ahmed Al Jaber, Chairman of Masdar.
A prolific writer, Dr Al-Hosany has been published globally in international journals and newspapers, including the International Journal of Management of Environmental Quality, Renewable and Sustainable Energy Reviews, Renewable Energy, and International Journal of Renewable Energy Engineering.
In 2015, Dr Al-Hosany received an Arab Woman Award, recognising inspirational, talented and deserving Arab women. Her professional achievements have been widely acknowledged through prestigious awards, including a Chevening Fellowship from the British Foreign and Commonwealth Office and the Emirates Business Women Award.
Prior to assuming her current roles, Dr Al-Hosany held senior leadership positions with the General Headquarters of the Abu Dhabi Police, including Head of Design and Studies in the Engineering Department. In 2007, she became the first-ever female Deputy Director in the Abu Dhabi Police.
She graduated from the Faculty of Engineering at the UAE University in 1992 and obtained her PhD from Newcastle University in the UK in 2002.
Dr Al-Hosany is also credited as one of the first two Emirati women to climb Mount Kilimanjaro, the highest free-standing mountain in the world at 5,895 metres above sea-level.