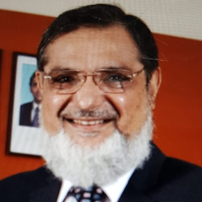 Padma Awardee Dr. Mohsin Wali has been a highly accomplished and well sought after cardio-physician of international repute. He is recently awarded “Best Physician of India”, “Icon of India”, ” Legend in Medicine” by Times Group, “Oscar of Healthcare” and ” Fit India” award. Dr. Wali is Honorary Consultant to Indian Armed Forces, Senior Consultant in Medicine, Sir Ganga Ram Hospital and Fortis Hospital.
Born in 1953 at Bijnor and did his graduation in 1975 and Post-Graduation during 1979 in Medicine from this Medical College with many distinctions, Gold Medals and Certificates of honour in all 10 subjects of MBBS for the first time. He was awarded Chancellor’s Medal for Best overall student by Governor and Best Alumnus of Kanpur University by the President of India.
Dr. M. Wali is the only formally trained doctor in Northern India in Geriatric Cardiology from University of Michigan and has tirelessly worked to improve the quality of water for dialysis in India. He is Fellow of American College of Cardiology and Royal College of Physicians from Glasgow.
His contribution in medical education is immense in the form of books chapters and articles in journals of National and International repute. He has lectured and toured all over the world to propagate the message of YOGA and fitness as a part of fit India campaign and is a fit India Awardee.
Dr. Wali has been the recipient of many International and National awards including “Man of Millennium”, ” Hall of Fame”, “SAARC” award, ” Medical Science Excellence Award Institute” and is also honoured by Rajiv Gandhi Excellence Award for Medicine in 2010 and many more to his credit including fourth highest civilian award- Padma Shree.
Dr. Wali is an astute teacher, a keen researcher and a nice human being with empathy and humility. During his service he has maximum number of patients to his credit for which he has recently been awarded Indian Red Cross Gold Medal for empathy and humane service by your kind hands of the President Pranab Mukherjee.
He has a unique distinction of serving three Presidents of India- Mr. R. Venkatraman, Dr. Shankar Dayal Sharma and President Bharat Ratna Pranab Kumar Mukherjee.
He has been bestowed with a second Lifetime Achievement Award from Times of India and Doctorate of Science from International Institute of Apostolic Ministries Nagaland associated with Pope Juan Paul.
Dr. M. Wali has many firsts to his credit and most importantly he has served down-trodden and poor of the society with equal zeal, interest and fervour.