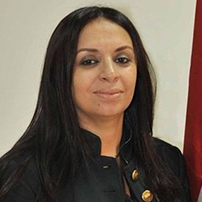 President, The National Council for Women in Egypt

Dr. Maya Morsi took office as President of Egypt’s National Council for Women (NCW) on 1 February 2016. Upon re-formation of the NCW on 19 January 2016, members of the council elected her to serve as the third president of the NCW since it was established in 2000. The NCW is the highest national machinery entrusted with formulating and monitoring national plans for the advancement of women in Egypt, and providing policy options and advice in all fields related to the development and empowerment of women to enable them to play their rightful and essential roles in society and integrate their efforts in comprehensive national development programs. Prior to joining the NCW, Maya Morsi had served, since 2013, As Regional Advisor on Gender Policies and Programmes in the United Nations Development Programme’s (UNDP) Regional Centre for Arab States in Cairo. She was responsible for providing policy advice and technical support for women’s empowerment and gender mainstreaming in planning and public budgets, as well as the formulation, monitoring and evaluation of regional and national strategies and plans for the advancement of women acrossthe Arab region. Maya Morsi’s career spans more than twenty years of dedicated service to the advancement of women and defending their fundamental rights. She served as Head of the Egypt Country Office of the United Nations Fund For Women – UNIFEM (2000-2013); UNIFEM Project Coordinator (1999-2000); Consultant for the Girls Education and Empowerment Project of the Ministry of Education in Egypt (1998-1999); and Project Officer in the Sustainable Human Development Platform for Action and Monitoring, implemented by UNDP in collaboration with the Ministry of Local Administration in Egypt (1995-1998). Prior to that she served as Academic Facilitator in the Public Administration and Communication Joint Program between City University of Seattle and the Arab Academy of Science and Technology of the League of Arab States (1997-1998). In 2008, Maya Morsi received a Ph.D. in Public Policy with a focus on the human security of Arab women from the Institute of Arab Studies and Research of the League of Arab States. She completed two Master’s degrees at the City University of Seattle, USA, in Business Administration (1998) and Public Administration (1997), after receiving a Bachelor’s of Arts degree in Political Science from the American University in Cairo (1995), with a minor in Mass Communication (Journalism).