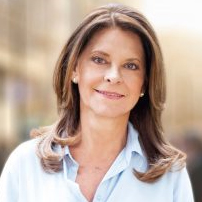 Colombia’s Vice President Marta Lucia Ramirez is one of the country’s most powerful conservative voices and an icon of the empowerment of women.
The Bogota-born politician has been active in her country’s politics since the early 1990s. In 2002, Ramirez became just the second woman in Latin American history to ever be appointed Minister of Defense. A lawyer by trade, Ramirez has an extensive private and public sector background and a history of climbing professional ladders. Her career began in 1975 at the legal office of Banking Superintendence. Three years later, she became the director of Central Bank Control.
She got her start in politics in 1991 when she was named Deputy Minister of Foreign Trade, a position she held for two years. In 1993, Ramirez returned to the private sector to become CEO of her own company, Marta Lucia Ramirez de Rincon and Associates. From 1997-1998 she was the Executive President of Colombia Gas Investment SA Invercolsa.
Seven years after her first political post as Deputy Minister of Foreign Trade, Ramirez was chosen as Minister of Foreign Trade by former President Andres Pastrana Arango. In 2002, she became Colombia’s ambassador to France but returned home after the election of Alvaro Uribe in order to helm her historic position as Minister of Defense.