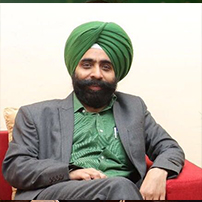 Dr. Manpreet Singh Manna, born on 14th March, 1971 at Patiala, Punjab (India), graduated in Electrical & Electronics Engineering from Mysore University, Mysore in the year 1993. He did his Master of Engineering in Power & Machines from Thapar University, Patiala and Ph.D. in Electrical and Instrumentation Engineering from SLIET (A Centrally Funded Deemed University established by Govt. of India), Longowal. Starting his teaching profession as Lecturer from SLIET in the year 1997, he has now attained the position of Director, All India Council for Technical Education (AICTE) under Ministry of HRD, Govt. of India, and New Delhi presently on deputation. While discharging his duties as Director, AICTE, New Delhi of University Bureau, Administration, Legal Cell, NEQIP and Incharge Regional Office, SWRO, Dr. Manna is the Officer-in-Charge of “SWAYAM MOOCs” project, an instrument for self-actualisation providing unique educational opportunities to the citizens of India for expanding their horizons of knowledge for a life-long learning. Dr. Manna with his persistent efforts and devotion under the able guidance of his Seniors at MHRD and AICTE, developed and made “SWAYAM PLATFORM” go-live for public well within the targeted period.
Dr. Manna received the “COMMENDATION AWARD” from Shri Pranab Mukherjee, the Hon’ble President of India on 9th July, 2017 during the Launch of “SWAYAM Platform”, one of the important digital initiatives of MHRD during 3 Days’ National Convention held during 8th July, 2017 to 10th July, 2017 at Vigyan Bhavan, New Delhi for his pioneering and outstanding efforts for development of SWAYAM Platform for hosting Massive Open Online Courses (MOOCs) within a record time.
Dr. Manna successfully organised the inauguration of “HACKATHON” on 9th November, 2016 at Teen Murti Bhavan, New Delhi under the benign Chairmanship of Hon’ble Union Minister for Human Resource Development in the presence of eminent academicians and intellectuals from all over the Country. Dr. Manna conducted “Smart India Hackathon” workshops, the first and biggest ever events in India, under the aegis of MHRD having support from as many as 25 Ministries and Government Departments, across the Country to disseminate awareness among the Students of Computer/IT/Electronics of all Engineering & Technological Institutions for active participation in this World’s largest event.
Dr. Manna was deputed as visiting Associate Professor by Ministry of HRD to AIT, Bangkok during 2012 session. He is a Fellow of Institutions of Engineers (India) and ISQEM, UK. He is Senior Member of IEEE USA, ISRD USA and IETI, Hong Kong. Dr. Manna is also Life Member of ISTE India, IACSIT Singapore and member of Advisory Council of CEGR India. Dr. Manna has published about 140 Research Publications for leading National and International Journals and attended a number of Conferences in the field of Engineering and Technology. He has delivered Expert Talks on various topics in his area of expertise on National TV channels and Institutions in India and abroad apart from chairing the session in IASTED Conferences at San Francisco, USA and Bangkok, Thailand. He is also serving as Editor and Reviewer for many International Referred Journals, Books and AICTE News Bulletin. He has also contributed chapters for various prominent technical education books. He has guided many UG and PG Projects/Dissertations. Keeping in view his vast experience in the area of Technical Education, IEEE Society has elected him as Executive Member for IEEE Delhi Section for the year 2016.
Dr. Manna has been nominated as member of the various committees like J & K state fee Structure Committee and BOGs; Member of Divisional Railway User Consultative Committee (DRUCC); Member of National Executive Council of Centre of Education Growth and Research for Two years; Honorary Advisor on the Board of CMAI; Member of Advisory Board of Confederation in Education Excellence, New Delhi and Expert Member for School Board of Engineering & Technology, Central University of Kashmir. Dr. Manna has been elected as President of the CEGR Core Committee for Two years upto 31.12.2017.
Dr. Manna has been conferred with the “Commendation Award” by the Hon’ble President of India; ‘Bharat Excellence Award’ with ‘Gold Medal’ by the Former Election Commissioner of India at IIC, New Delhi in 2014. Dr. Manna is also recipient of ‘Shreshth Aacharya Award-2011’, ‘Best Citizens of India Award-2014’ from FFI, New Delhi, ‘Outstanding Faculty Award-2015 VIFFA’ at Chennai and ‘Rashtriya Shiksha Gaurav Puraskar-2015’ from CEGR, New Delhi. He is also recipient of Innovative Policy Maker -2017 Award from News India & GESA, India.