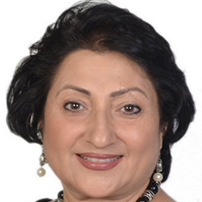 Dr. Mala Kapoor, the Founder and Director Principal of Silver Line School Ghaziabad, started her career in the field of education as a promising star whose radiance has augmented with each passing year.
Having topped in college in Bachelor’s and Master’s degrees in education with the specialization in Administration and Supervision, she completed her doctoral work in the development of a child. Besides her achievement in the academic field, She was also excelled in fine arts, performing arts and sports. She won a National Award by NCERT in 1997 for her project on the innovative method of learning for the pre-primary children.
She possesses a multifaceted personality. Her creativity and charismatic persona can be seen all around her, especially in the institution, which she has been managing for more than two decades now. Her efforts in pursuit of “Education Beyond Tomorrow” have placed the school as one of the best in the whole Ghaziabad region.
She believes in providing every opportunity to children for their personality development, tapping the budding talent at an early age and to motivate them to explore their potential to the fullest.
As a token of love and care for Mother Nature Dr. Kapoor launched a special project ‘Green Clean Ghaziabad’ with the motto “Plant today To Live Tomorrow” to inculcate environmental awareness in the children at an early age. She has also cut an audio CD on environment theme “The Green Wave” featuring the songs written, composed and sung by her. Her persistent dedicated efforts towards the environmental conservation along with the children of Silver Line School were acknowledged by Centre for Science and Environment. The school was adjudged amongst the top 20 schools in the country and was awarded Green School Award.
Her vision for the integration of technology into education won the 1st Intel Technology Award 2000 for the school in entire North India.