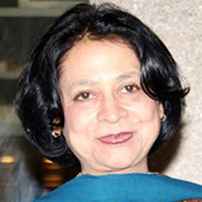 Dr. Lavlin Thadani is the Chairperson of Muskan Productions, a Media Production House based in New Delhi. Muskan was established by her in the year 1992.

She started her career as a teenager, both as a broadcaster and a journalist. Over the last 25 years, she has made over a hundred films/serials for many prestigious organisations, such as Doordarshan, Ministry of HRD, Dept. of Women and Child Development, National AIDS Control Organization, Ministry of External Affairs, Ministry of Rural Development, Directorate of Audio-Visual Publicity, The British Council and Transport Corporation of India amongst others.

Her wide array of work includes films on varied topics, ranging from social issues to films on health and education and corporate films.

In 2008, as a befitting tribute to Indian women on the International Women’s Day, a four-day-long grand film festival ‘Saluting Women’ from the 5th to the 8th of March was organized and hosted by the India Habitat Centre, New Delhi.

She has worked as a National Media Consultant with the WHO and as a freelance creative photographer with numerous solo exhibitions to her credit sponsored by Mr. Ibrahim Alkazi’s Art Heritage at Triveni Kala Sangam, New Delhi and Jehangir Art Gallery, Mumbai.

She recently received the ‘Great Asian Woman Achievers Award’ bestowed upon her by the Bharatiya Cultural and Social Development Association promoting the ‘BetiBachao, BetiPadhaoAbhiyaan’.