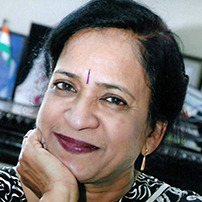 Dr Lakshmi Vyas is an educationist cum academician and served as the Principal of one of the most reputed college in Mumbai, Elphinstone College. She continues to work in a college in London as head of Quality Assurance.
Dr Vyas dedicates a lot of time for charitable organisations which are listed below and her main objective is to unite the Hindus of Europe under one umbrella – Hindu Forum of Europe
Dr Vyas was invited to a High Level Leader’s meeting at European Commission, to talk on post Brexit scenario, which was very much appreciated by the parliament members present on 29th November 2016.
Lakshmi Vyas coordinated the recently celebrated Diwali in European Parliament on 9th November, which had a good attendance of MEPs, High commissioners, NGOs, spiritual organisations, non-political and community organisations from UK and Europe which was a huge success.
Dr Vyas coordinates with UK Census on their consultations. Being a SACRE member, attends and contributes to Standing Advisory committee on Religious Education of Royal Borough of Greenwich. Her contributions to Religious Education Council, UK is also laudable.
Dr Vyas Lakshmi Vyas is well versed in Hinduism and has clear views on immigration and integration as the head of quality. She works with youngsters and learners from all walks of life. She is responsible in her Institution to make policies and to incorporate the recently introduced changes on account of Brexit – which includes Prevent Duty, Safeguarding, Equality and Diversity and several minor policies imbedded in them.
She has authored three books and has to her credit more than 30 research publications in reputed international journals and magazines
1. President – Hindu Forum of Europe
2. Chair of Education – Hindu Forum of Britain
3. Member – Religious Education council of UK
4. Member – SACRE (Standing Advisory Committee for Religions
Education, Royal Borough of Greenwich
5. Member – Golden Tour Foundations (WW1 & Hindu Matters in Britain)