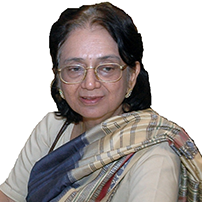 Professor Jyoti K Parikh, Executive Director of (IRADe) was a Member of the Prime Minister’s Council on Climate Change – India and is a recipient of Nobel Peace Prize awarded to IPCC authors in 2007. She served as the senior professor and Acting Director of Indira Gandhi Institute of Development Research (IGIDR), Mumbai 1986-2003, International Institute for Applied Systems Analysis (IIASA), Austria for 8 years (1980-86, 76-78) and Planning Commission, as senior energy consultant at New Delhi (1978-80).
She has served as energy consultant to the World Bank, the U.S. Department of Energy, EEC, Brussels and UN agencies such as UNIDO, FAO, UNU, and UNESCO, Environment Consultant to UNDP, World Bank and so on. She worked as an advisor to various ministries for Gov. of India. She has been on Global Agenda Councils of World Economic Forum; Decarbonisation of Energy and Urban Development. She has attended several meetings of Think Tanks, T 20 for
Discussing G20 related issues.
She has held national and international appointments, which includes the Technical Advisory Committee (TAG) for Energy Trust Funds Programmes of the World Bank; the advisory Board of Tyndall Center for Climate Change, University of East Anglia, Norwich, UK, 2001-2004.
Scientific and Technical Advisory Panel (STAP) to Global Environment Facility (GEF) – 1995-1998. She was on the Board of directors of Indian Renewable Energy Development Agency Ltd (IREDA) 2001-2004 and also National Institute of Urban affairs (NIUA), MoUD, GoI.She obtained her M.Sc. from University of California, Berkeley, in 1964 and Ph.D. in Theoretical Physics from University of Maryland, College Park in 1967. She has guided 12 Ph.D. theses in energy, environment and climate change and given lectures in more than 40 countries around the world.
Her publications include nearly 200 project research papers and 25 books and monographs and span many areas ranging from policy analysis of energy and environment, climate change policies, modeling, technology assessment, power sector, natural resource management, agriculture, health, poverty and gender.
She has served on editorial boards of several Internationals Journal e.g. Utilities Policy and Energy and as a reviewer for many other journals.