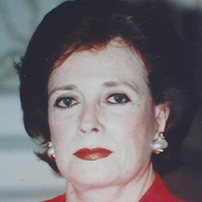 Jehan Sadat has become an activist and a contributing participant in international women’s conferences and a catalyst for women’s movements in the Middle East and the Third World.
Mrs. Sadat began her social activities several years before her husband, Anwar Sadat, became President of Egypt. She started a women’s emancipation movement in Talla, which was Anwar Sadat’s village town. From the beginning, this movement was aimed at helping women become more self-sufficient and less dependent on their husbands.
Among time activist in social work, Mrs. Sadat was among the first to reach the Suez front in 1967 to visit and comfort the wounded.
She has devoted a great deal of her time to establishing the “Al-Wafa Wa Amal” (Faith and Hope) Society in Egypt. This society built the largest hospital in the Middle East for the treatment of war wounded and the largest rehabilitation center for the treatment of handicapped veterans and children. Al-Wafa Wa Amal is a fully integrated city for handicapped war veterans and civilians, complete with clinics, rehabilitation centers, vocational training departments and recreation areas. It was designed to accommodate two thousand patients. The Wafa Wa Amal city, founded by Mrs. Sadat in 1972, depends totally on donations from all over the world.
In 1977, Mrs. Sadat initiated the idea of S. O. S. Children’s villages International are designed to offer needy orphans the opportunity to lead a normal family life, within a happy and healthy atmosphere.
Among her major concern have been more concentrated efforts for implicating programs for family planning and for eradicating illiteracy. It is her firm belief that “the most precious capital any country can have is an educated citizen.”
She was instrumental in pushing through the Egyptian Parliament, the first ever, family laws and amendments to existing laws which gave women some equality in family affairs. These family laws give the wife automatic custody of children in case of divorce, boys until the age of thirteen and girls until the marry. Most importantly, in addition to alimony and child support, the divorced Wife was to be automatically awarded the family dwelling.
In 1975, Mrs. Sadat headed the Egyptian Delegation to the International Women’s conference in Mexico city. She also represented Egypt in Copenhagen, Denmark and in New York at the United Nation. She was elected Chairperson of her village council for five consecutive years and she founded the Arab African Women’s League.
Among the many organizations and charitable associations that Mrs. Sadat has either founded or headed are; The Egyptian Red Crescent Society; The Egyptian Blood Bank Society; The Egyptian Society for Cancer Patients; The Egyptian Society for Biomedical Engineering; The Scientific Association for Egyptian Women; The Higher Committee for Children; The Egyptian Society for the Welfare of University and Higher Institute Students; The Egyptian Society for the Preservation of Antiquities and the Society for Saving the Ecology.
At the age of forty, she entered Cairo University and obtained her Bachelor of Arts degree in Arabic Literature, Mrs. Sadat graduated at the top of her class. The same year she graduated, she was appointed Lecturer in Arabic Literature at Cairo University where she taught and lectured for a number of years.
Mrs. Sadat went on to earn both her Master of Arts degree in 1980 and her Ph.D. in October 1986 from Cairo University.