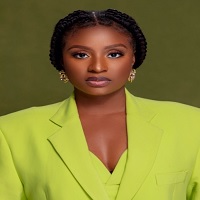 Inya Lawal is a social entrepreneur working to be a world changer. Her company Ascend Studios produces TV and feature content and consults for companies and brands.
Inya is the current Country chair for Nigeria on Export and Credits for the G100 – Women Economic Forum.
She was one of 19 participants selected worldwide for the Fortune Most Powerful Women’s Mentoring program in 2019
where she was mentored by Dina Powell and a host of the senior executives of Goldman Sachs.
She a lead program partner to the U.S. Consulate General in Lagos, Nigeria and the program partner for the Academy
for Women Entrepreneurs (AWE) – a White House/Department of State initiative designed to support women entrepreneurs with knowledge, network and funding to start and grow their businesses. She oversees a diverse group
with emerging and well-established businesses from different industries who received lessons on business
management and networked with like-minded entrepreneurs and mentors.
Inya is the founder of the African Creative Market (ACM), an event that brings major stakeholders in the African and international creative industries together for creative trade and to grow the creative economy in Africa.
She serves on the board of the Women In Film and Television International (WIFTI) as secretary; and is the president of the Women In Film and TV Africa (WIFT Africa).
Inya has led several international programs like the American Film Showcase Lagos, Africa Women In Film and TV
Empowerment Program, The No Girl Left Behind Campaign (Paris & Nigeria) and as a festival director for the U.S.
Consulate Documentary Film Festival.
She holds a Masters in Artistic Performance from Stockholm University in Sweden. Inya is a recipient of a Honorary
Doctorate Award from the ESCAE Benin University, Benin Republic for her outstanding contribution in Women’s
Leadership and Global Trade Development. She is also a recipient of a Honorary doctorate from Myles Leadership
University for her outstanding contribution in the areas of Youth & Women Development, advocacy, Talent Discovery
& Development, Empowerment, Business Management, Mentorship, Leadership, and philanthropy.
Inya was also given a Women’s History Month honorary award by the American Corner Ibadan in recognition of her
contribution to the development of women and girls in the Nigerian Society.
She is a two-time nominee of the Tällberg-SNF Eliasson Global Leadership prize, an awardee of the Royal African
Young Leadership Forum (RAYLF) Award and a recipient of the Kidpreneur Award of Recognition for selfless effort
and support towards the development and empowerment of Nigerian Children.
She is the founder of two (2) not-for-profit organizations, Ascend Studios Foundation, for capacity building and social, educational and economic empowerment of women and youth; and, the Africa Children’s Creative Network – to discover and nurture creative skills in school age children.