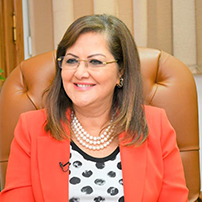 Minister of Planning and Economic Development, and a prominent Egyptian economist and a renowned academic author. Dr. Hala El-Said received her PhD in Economics in 1989 with highest honors from the Faculty of Economics and Political Science, Cairo University. Dr. Hala became the first elected Dean of the Faculty of Economics and Political Science in 2011 and Cairo University’s Deputy President for Scientific Research and Exterior Relations in 2013.
As a Board Member of Central Bank of Egypt and the Executive Director of the Egyptian Banking Institute (EBI) for 8 consecutive years, Dr. El Said managed the institute with a vision to create a professional financial training arm, which applies international best practices to develop the technical and managerial skills of the financial sector professionals in Egypt and the region. She led a group of experts in the Egyptian Banking Institute (EBI) and a number of consultants to achieve international accreditation and be the first ACCET Accredited Banking and Financial training institute in Egypt and the region (2006-2008).
Dr. Hala has proudly served as an advisor to the Governor of the Central Bank of Egypt (CBE) and a member of the board of trustees of the Anti-Money Laundering Unit at the CBE, and served as a Board Member of Arab African International Bank.
Dr. El Said is a prestigious author of a wide range of internationally acclaimed research papers, studies and reports on myriad economic topics ranging from the reforms of financial sector, International finance to Privatization and Economic reform and development, to mention only a few: Bank Mergers, SMEs access to finance, Corporate Governance as well as the Role of the State in Credit Risk.
As a culmination of her prominent role in the public service, Dr. Hala El Said was appointed as Minister of Planning, Monitoring and Administrative Reform on February 16th, 2017. Moreover, Dr. El Said has been appointed as Minister of Planning and Economic Development since December 22nd, 2019, in addition to continuing her mandate on some files related to the administrative and institutional reform process, as well as the comprehensive supervision on the formulation, implementation and updating of the Egypt’s vision 2030.