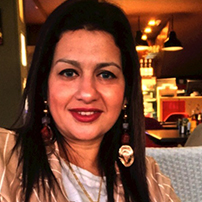 Haidi’s life mission is to advocate for Women Inclusion/women with disabilities/ Diversity and multiculturalism and be the voice of unheard women and endeavour to create opportunities and building bridges for women between developed (Western societies) and developing countries (Africa) to be visible in their communities and empowered. Dr Badawi is a Coach and mentor who lead inclusive leadership in various global boards and international/African and Australian women empowerment networks. Haidi is the Founder of Future STEAM_preneur a community for thriving youth in STEAM and future learning opportunities of success .Haidi is a recipient of the Inaugural Women’s Board leadership program scholarship from Victorian Government. She is recognised as an international Public Speaker at several international forums, such as the Women Economic Forum 2020 and received the “Iconic women creating a better world for all” award.

Haidi is a Global goodwill ambassador of Australia at GGA Global Ambassador and the co-director of Australia/Oceania, a member of (Australian Institute of company directors-AICD), was a Board Director at women with disabilities Victoria and a Board member at United National Australian Association (Victorian Division). Haidi is also a member founder of “Women Heart to Heart “that has members from all continents including Africa. She had a science background and had four registered patents in science innovation and has been awarded several international and national awards in the areas of Science and teaching innovations including an Endeavour Language Teacher Fellowship (Australian Government).