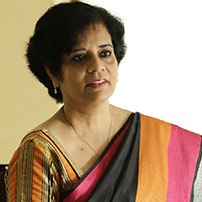 Dr Geeta Madhavan is the first woman in the country to hold a PhD in International Terrorism. She was awarded the Doctoral Scholarship for Advance Research in International Terrorism by The Hague Academy of International Law at The Hague, The Netherlands, the only one from Asia in 1997. Dr Geeta Madhavan is a consultant on International Law offering her expertise to the academic departments that feature International Relations programmes. She was Visiting Faculty at the University of Madras and is Visiting Faculty handling various subjects on International Law at the Tamil Nadu Dr.Ambedkar Law University, Chennai. She is President and Founder Member of the think tank in Chennai – International Law and Strategic Analysis Institute (ILSAI). She is an Advocate with specialization in International Law.
She has visited the United States under the International Visitors Leadership Program (IVLP) on security issues. She has attended the Salzburg Seminar Conference on Security concerns in East Asia held in Austria and the RCSS seminar on Eliminating South Asian Conflict held in Sri Lanka. She has also attended the Wilton Park Conference at Brighton, UK organized by the Foreign and Commonwealth Office, UK. She was also invited by the Harvard University Kenney School of Govt, USA in the Leaders of South Asia program.
For 12 years she has been in various security related Working groups preparing policy papers for the National Defence University, Washington DC on subject like counter terrorism, US Afghanistan policies, Indian Ocean maritime issues ,piracy etc .
She has presented numerous papers in national and international forums and published books and numerous articles on various international issues like legal regimes in conflict situations, extradition, human rights, refugees, regional co operation against terrorism, international criminal law and regional cooperation and comprehensive security.
She was chosen as one of the 200 women world over on the Global Wall of Fame of Europe Aid (EU Commission’s Department in charge of Development) – as working on development on international issues for 2016.
She has recently published a book of poems Songs Of The Crystal Bird dealing with varied subjects ranging from violence against women, terrorism , love, hope and other human emotions. The book has been well received and has sold more than 100 copies.