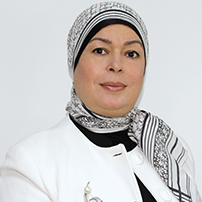 Dr. Boutheina Ben Yaghlane Ben Slimane has been General Manager of Tunisian “Caisse des Dépôts et Consignations” since March 2016 and she was Secretary of State to the Finance Ministry in 2015. In the legislative elections of October 2014, she was elected as a deputy in the Tunisian Parliament. From May 2012 to June 2013, she was an advisor to the Minister of Regional Development and Planning.

With a PhD on Management Information Systems from the Higher Institute of Management of Tunis and in collaboration with IRIDIA from ULB in Belgium in 2002, Boutheina Ben Yaghlane is a full professor at the Institute of Business Studies (IHEC) in Carthage, as well as at Tunisian and French institutions. Author of numerous research articles in specialized international journals and conferences.

In May 2017, Dr. Ben Yaghlane received the “Women of the Decade Award in Enterprise & Leadership” in the Women Economic Forum of New Delhi (India) and in September 2017, Jeune Afrique choose her among the eight powerful women in Tunisia.