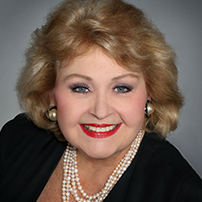 In 1972, she was Rhode Island’s Outstanding Small Business Owner by the United States White House. She has been listed in the Marquis Who’s Who in the World since 1982. In 2010, she was recognized as One of Fifty Most Influential Women in Houston. In 2018, she was recognized for a Lifetime Achievement Award in Mediation from the Association for Conflict Resolution and in 2018 the Houston Business Journal recognized her as a Woman Who Means Business and a Professional Business Mentor.

Currently, since 1993, she has been a Texas Distinguished Credentialed Mediator. Her work in the field of alternative dispute resolution has been in training mediators and practicing as a mediator, arbitrator, ombudsman, facilitator, negotiator, conflict resolution coach, as well as author. She is also a Fellow of the World Mediation Organization.

Dr. Manousso has recently lectured in Shanghai, China; Bangkok, Thailand; Goa, India; Halifax, Canada; Ireland; and New Zealand. Students come from around the world to take her trainings in Houston. A former president of the Association of Conflict Resolution Houston chapter, she is internationally recognized as a leader and mentor in the field of mediation. She was the 2016 and 2017 Chair of the Association for Conflict Resolution International for the Education, Research, and Training Section.

She mediates civil and family cases, such as elder and adult mediation. Dr. Manousso serves on the international ACR Standards Committee for Elder Care Mediation Training and has been a seminal international lecturer and expert on civil, divorce, and elder mediation. In 2008, Barbara was appointed a state Commissioner by Texas Governor Perry to serve as a commissioner on the Texas’ Nursing Facility Administrators Advisory Committee.

She has served on dozens of non-profit boards, often presiding as president. Dr. Manousso has been an active member and supporter of AGOC by serving on a variety of committees and, for over 25 years, working at the Greek Festival.