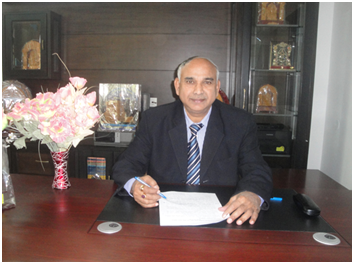 Dr. B. B. Kaliwal, Vice-Chancellor, Davangere University, Davangere.Born in 1954, at Narayanpur, ShiggaonTaluk of Haveri District. He has a very good academic distinction throughout his career. He completed B.Sc in 1974, M.Sc in 1976 and Ph.D. in 1981 from Karnataka University, Dharwad. He obtained his Ph.D. in the field of Reproductive Biology. His other research areas include Reproductive toxicology, Developmental Biology, Physiology, Microbiology and Biotechnology. He has completed 15 short-term courses in Photobiology, Biological Sciences, Orientation Courses, Chronobiology, Zoology, Bioscience, Biotechnology,Microbiology,Bioinformatics,etc.

He is a model for excellence and enthusiasm, an honest and modest teacher having served as a Assistant Professor in Karnatak Science College, Dharwad (1979-1988), Senior Assistant Professor, Post-Graduate Department of studies in Zoology (1988-1990), Associate Professor (1990-1999) and Professor and Chairman in Post -Graduate Department of studies in Biotechnology and Microbiology for 12 years (1999- till date), Karnatak University, Dharwad, which accounts for 36 years of research and teaching experience and dedication towards research and teaching.

Dr.Kaliwal is an active researcher. He has successfully guided 30 Ph.D. and 34 M.Phil. students. He has published more than 175 research papers in various National and International journals. He has completed 15 research projects funded by UGC, DST, DBT etc. Special Grant-Received Rs. 12 Crores from Department of Biotechnology (DBT), New Delhi. He has attended and presented papers in more than 100 National and International Conferences, delivered key note addresses and Chaired the sessions in various Conferences/Seminars and Symposia. He is associated with many scientific bodies, in India and abroad. He is fellow of many Acedemic societies and awardee of Dr. B. S. Chavanâ€™s and Life time achievements Gold medal awards. He is Enlisted Person in Marquis â€˜Whoâ€™s Whoâ€™ in the World Directory (1999, 6th Edition).

-2- Dr B. B. Kaliwal has contributed significantly to the science and for the first time he has been shown that there is a co-localisation of Fos containing neurons within SON of the hypothalmus also express nNOS. The compensatory ovarian hypertrophy affecting ovarian follicles studies provide a model to demonstrate in testing the pesticides for antigonadotropic, antiestrogenic or antiandrogeic activity in the rodents. The implantation delay and nidation by progesterone model is used to understand possible mechanisms of anti-implantation activity in rats. Studies on molecular characterization and epidemiology of Staphylococcus aureus from clinical samples demonstrates for the first time emergence of VRSA containing van A and van B genes from India and indicates the prevalence of the increased antibiotic resistance. Study of the production of L-Asparaginase, an anti-tumor agent from filamentous Fungi- Fusariumequisetihelps in the treatment of cancer. Studies on the treatment of Phytochemicals to diabetes, cancer and antioxidant activities models in mice helps in understanding the mechanisms in controlling the diseases.

In addition to the above accomplishments, Dr.Kaliwal has the honour of being appointed as an Editor of Ten International Journals. Dr.Kaliwal was instrumental in organizing a number of conferences / Symposia. He is very oftenly invited to deliver special lectures Symposia / Seminar / Conferences in various Universities and Academic Staff Colleges of India. He is a referee for evaluating M.Phil. and Ph.D. thesis of different Universities in India and assessing scientific papers, submitted to reputed Scientific Journals at National and International levels, for publication.

He is the recipient of Open Merit Scholarship and a prestigious Post-doctoral Commonwealth Fellowship awardee at University of Bristol, UK, where he worked with Prof. David Murphy, Professor of Experimental Medicine, University of Bristol, UK (2003-2004). He has also visited number of countries such as Japan, Korea, Singapore, Belgium, Netherlands, Switzerland, France, Italy, Denmark, Germany and other European countries. He is involved in many academic and administrative activities and has held many important positions in Karnatak University. He was a Member and Chairman, Board of studies in Zoology, Applied Genetics, Bioinformatics, Biotechnology and Microbiology of different universities in Karnataka and other States. He has tremendous experience since he has worked in various cadres such as a Special Officer (1994-95), Elected member of the academic council (1995-98), Coordinator for refresher courses, Orientation Programmes, Member of LIC, Development and other committees in the Universities. Apart from his academic distinction, he was president of Research Forum for 4 years, President of Karnatak University Post Graduate Teachersâ€™ Association for 6 years and President of Council of University Teachers Association in Karnataka State for 13 years.