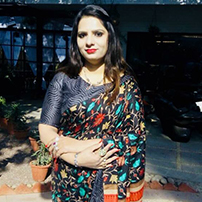 Amit meaning ‘infinite’, ‘boundless’, ‘unmeasured’ took birth on 3rd November in Varanasi, one of world’s oldest living cities rightly called the religious capital of India located at the bank of river Ganga, in the southeastern part of the state of Uttar Pradesh in northern India. She was brought up by pious, loving and intelligent mother Mrs Kulwant Kaur and dedicated, broad minded and educated father Mr. Jang Bahadur Singh Thapar. She was called as Twinkle by her parents. Her childhood was full of smiles and laughter with her sweet younger sister Dr. Jasbir Kaur. She was very studious, intelligent and hard working student. She had curious mind and keep on asking questions. She liked to drench herself in rains, dancing, singing, painting on canvas and playing in sand. Her childhood revolved around her school, family, friends and knowing the unknown. Her mom wanted her to always be happy and SMILE. She was watchful, bold and wanted to leave a mark in society helping mankind and being scientist. She topped in her graduation and got married to Mr. Rajdeep Singh Puri son of ex army officer Major D. S. Puri. Now innocent twinkle transformed into responsible woman. Mrs. Amit Kaur Puri could easily have fallen into the trap of parties, travel itineraries every six months, swapping news about new collections, new eating joints, and frittered away finances. But early on in life, she cast an anchor in educating herself pursuing Ph.D. in plant sciences. It was the long way to go. She faced many huddles in the path. There is an interesting event that she completed her M.Sc. First year paper on 17th May and delivered her son same month on nineteenth. In her M.Sc second year she met with an accident. It was fatal multiple fracture fracturing her tibia bone and seven pelvic cracks. What to say about standing on her feet, she was not able to sit also. She was on bed rest for four consecutive months but her flame of studying never died and she cleared her post graduation in flying colours. Frivolity and extravagance are temptations she turns her back to, preferring to face harsh realities of life and eroding moral, economic and literary climate of her India, she chooses to do research on most underprivileged and ignored sectors-“indigenous people”. There were questions pooping up in her curious mind- Why farmers of Vidarbha are committing suicides?, Why infant mortality rates are high?, Why rural women and children are in 3rd and 4th category of malnutrition?, Why hunger persists? And many more such…..

She has spent seven years in the hilly tracts of Vidarbha platueslike Sironcha, Etapalli, Bhamragad and Tipagad of Gadchroli; Mul Gondpipri and Nagbhid regionsof Chandrapur; Bitargaon, Kanha and Arvi of Yavatmal; Chikaldara, Dharni, Dhamgaon, Sirsagaon and Ner of Amravati; and Gondkheri, Ramtek(Devlapar) region of Nagpur: parts of which lie cut off from civilisation, driven by a single goal – eradicating malnutrition in Gond and Korku tribes as well as documenting and salvaging India’s traditional herbal remedies before they are lost to the world. She oaths to eradicate the problem of malnutrition not only in tribal population of Maharashtra, India but the entire human race facing this problem. She has published many papers in various national as well as international journals which ishighly accepted worldwide. Her topic of Ph. D. was “Nutritional Aspect of Unconventional Foods Consumed By Gond and Korku Tribes inhabiting in Vidarbha” under the guidance of Dr. Alka Chaturvedi. She gives entire credit of her work to her mother Smt. Kulwant Kaur Thapar.
Titled as a ‘modern day curious result oriented botanist, Dr. Amit Kaur Puri has been painstakingly tracking traditional healers, called Bhagats, Bhumkas, elderly people, staff members of district health dept., forest officers and housewives in central India.
Dr. Amit kaur Puri also conducted research to know about how tribal in entire Vidarbha are living happily by staying close to nature. How they are involved in forest conservation, tribal locality has been explored by her resulting in depth study about the disaster of malnutrition among Konkani tribe mainly that of women and increasing rates of infant. Total number of malnourished women and children were collected and the separation was done between the affected or malnourished tribal who are getting treatment and those who are not even aware of getting medical aid. Survey also includes life style, status, poverty level, transportation, literacy, prevailing superstition if any including dietary pattern of tribal.

Prompted by concerns that the priceless heritage of tribal food, medicine and culture residing within the ageing generation of these tribes, would be gone with them. She made up her mind to help preserve the pool of knowledge, nurtured by oral tradition. The younger generation is leaving the impoverished valley in droves for livelihood.
Besides, the ravages of deforestation and modernization are compounding the problem. For example, leaves of Cassia tora is a marvelous herb for treating anemia, which grew abundantly in Vidarbha region. Amit Kaur Puri accordingly familiarizedherself with the local dialect to gain the tribal trust as they still remain deeply suspicious of outsiders. She undertook hundreds of grueling, hours of bumpy rides to various Gond and Korku inhabited regions followed by climbing up the steep inclines.

The young botanist’s quest paid off years later. He painstakingly built up a list of malnutrition affected areas, affected tribes with emphasis on women health and infant mortality, causes of problem, survey of health departments, catalogue of numerous of medicinal plants and tribal treatments. Dr. Amit Kaur Puri, who holds a PhD in botany, on topic entitled “Nutritional Aspect of Unconventional Foods Consumed by Gond and Korku Tribes Inhabiting in Vidarbha” inferred that being utterly poor, tribals even neglect the pregnant women, giving rise to the child deaths. In addition, superstitions concerning diet and justified claims for particular food are also cause of their ill health. As a consequence the tribal suffer from malnutrition and diseases like iron deficient anemia, diseases of gastrointestinal tract, phenylketourea, gout, liver cirrhosis, fatigue etc. Survey was conducted which recorded disease wise deaths within 14 months due to malnutrition apart from the death due to other aliment. Inadequate food increases the risk of infections which is evident from the table as number of deaths due to pneumonia is maximum. Other diseases occurring as the result of improper nourishment in children are deformity, complications of respiratory tract, Siamese twins, high fever, seplicemia, hypoglycemia, hypothermia, distended stomach and prenatal birth.

Amit Kaur Puri, proposed that the knowledge of traditional healers should also be protected under intellectual property rights (IPR), as a way of making them economically independent and self-reliant, fully integrated with the mainstream.
Nutricandy and fortified common salt with iron and protein rich unconventional leaves, a multi-herbal formulation for kids and lactating women, would act as a preventive tool for digestive problems, infections in the mouth, cough and cold, tooth- and gum-related problems.
The vital discovery of lesser known wild edible plants and herbs and their role in healing would encourage cultivation, generating direct and indirect rural employment while redefining the economics and cultivation of these plants in India was recommended by Dr. Amit kaur Puri. If there is only one thing that could be said about her, it would be “She is focused”. She strongly believes that if we focus on our aspirations, we will get it for sure. Once you make a decision, everything else follows easily.
She owes all “to the divine”, she attributes all her social work to the many influences in her life starting from her parents and early life. She gives credit of her success to her husband. She is blessed with very understanding son Dhanraj Singh and lovely daughter, Jasmit Kaur. Medicinal garden at New Era in Panchgani, implementation of rain water harvesting and plantation of one crore trees in and around Delhi are also included in her expertise. It was a great challenge to revive four lakes of Nagpur city. She took it as a challenge and was able to revive all the four lakes providing life to them. She is working for three E’s viz. Education, Environment and Empowerment. Scientist and Social Activist Dr Amit Kaur Puri is working for “Impact of educational policies on social and economic status of Women of Mewat, Haryana”-region which is the state facing very high percentage of crime against women. Infant mortality and female infoeticide is also major part of her project for social cause. She wants to make green earth greener, revive and conserve already existing water bodies, empower women by education and skill development and conserve Indian culture and traditions. She received Woman excellence ward 2014 by Indo-European Chambers, best presenter Award for scientific research paper 2015, Humanity achievers award 2016, Best Civilian award 2016, Social Activist Award 2016 from Social Umbrella, Santa Award in Social worker category, Green Patron Award from green Earth and Abdul Kalam Award for Education 2016.
She want to give message to today’s women that respect yourself and other women around u as it is said in Guru Granth Saheb that “Soo kyu mandda aakhiye, jit janne rajan” means woman who gives birth to kings, woman who gives birth to saints and the woman who gives birth to warriors should be highly respected and never get insulted. Love yourself and entire world will love you.

She has faced many up and downs. Life was never smooth for her but her perseverance, humbleness and determination let her turn impossible to possible. There is long way to go, time is less!!!
“Adversity causes someone to break and some to break the records.”