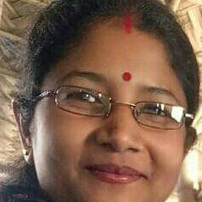 Doli Prova Kalita (Sarmah), B.Sc. LL.B., joined as Assistant Secretary of Bharatiya Cha Parishad, a Tea Planter’s Association, established in 1944, in 2017 and promoted to Secretary of the Parishad in March, 2020. Also associated with All India Radio, Dibrugarh Station as casual announcer since 2007. Bharatiya Cha Parishad (BCP) is in partnership with UNICEF since 2008 and working in the field of adolescent empowerment (Child Protection).