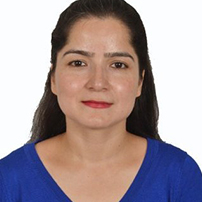 Dimple Kaul, a woman from a persecuted minority community in India, has risen against unsurmountable odds to emerge as a strong, independent, empowered woman. Her family and entire community braved fundamentalist terrorism in the valley of Kashmir in the year 1990 that resulted in their exodus from the land of their forefathers with nothing but bare essentials to become refugees in their own country.
With degrees in engineering and business administration, she has held leadership roles in major Indian and global corporate entities, represented her employer organisations in International fora and created value in multiple roles. After a long career, filled with rich experience in both corporate and non-profit sectors, she is preparing to enter the field of education as a third-generation social entrepreneur, thereby following the footsteps of her grandfather and father, for, the spirit of service runs deep in her family.
Taking this leap has been on her mind, right after recovering from a near fatal accident few years ago. Her participation in, and interaction with accomplished women at, Ted Women 2018 acted as the final impetus and she decided to go back to school! She is presently pursuing an education in Liberal Arts to follow her long-term goal of contributing to the field of learning, knowledge and education.
As a writer and columnist, Dimple has written for Financial Express, Daily Excelsior, Kashmir Times and First Post in the past. She writes regularly for various new-age, online portals and pens a regular blog on The Times of India, the largest selling English-language daily in the world. An accomplished bilingual poet, she has penned an anthology of poems, both in English and Hindi. She has been consciously writing to heal from an early age and believes in the power of empathetic, compassionate communication.
Her upbringing and family values have ensured that she did not grow up in bitterness but a better understanding of the world around her. She is unabashed in her conviction that compassionate, non-judgmental learning is what we need to leave the world much better than we find it and that education can play a vital role therein. Insights from her personal journey, a rich corporate and non-profit experience, curiosity for learning, indefatigable energy, and a respect for diversity, are just few of the things that she brings to the table.