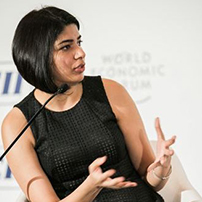 Diksha Madhok is the Editor and Director of platform at Quartz India. Previously, she has worked with Thomson Reuters in New Delhi and was also associated with the ThePrint.in as Digital Director. A master’s graduate in journalism from Columbia University, she has also been part of the founding teams of two media startups — Quartz India in 2014 and ThePrint in 2017.