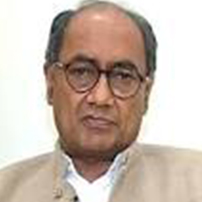 Digvijaya Singh (born 28 February 1947) is an Indian politician and a Member of Parliament in the Rajya Sabha. He is also currently a General Secretary of the Indian National Congress party’s All India Congress Committee.[3] Previously, he had served as the 9th Chief Minister of Madhya Pradesh, a central Indian state, for two terms from 1993 to 2003. Prior to that he was a minister in Chief Minister Arjun Singh’s cabinet, during 1980–84.