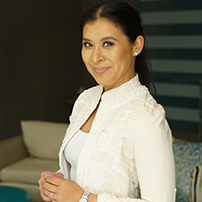 Didi is the Founder and CEO of The Yes Academy, a results and success driven educational program for entrepreneurs, focusing on confidence, connections and cash flow. Didi and her husband Michael own an interior design company J2D2 Designs, where they have completed full multi-million dollar renovations with the design focus on their signature transitional style and Feng Shui. They are also seasoned real estate investors.

Didi is an Executive Producer alongside Larry King in a television show called “In Case You Didn’t Know with Nick Nanton” on Amazon Prime Video. She is the Producer and lead in a conscious television show called “Awakening Giants”, currently in its second season where entrepreneurs are stretched to their limits in personal transformation, directed by seven-time Emmy Award winning producer Evan Weinstein of “The Amazing Race.” She has also begun the film “The Million Dollar Woman” about women empowerment as an Executive Producer and host.

Didi’s multiple civic and philanthropic affiliations include sitting on the board of Cedars Sinai Hospital’s Obstetrics Patient and Family Care Council as well as on the Advisory Board of Destine 4 Greatness, a non-profit organization partnering with LAUSD (Los Angeles Unified School District.) She is also the President of the Western USA-India Business Council, Women’s Indian Chamber of Commerce and Industry and is the Head of the All Ladies League Women Economic Forum, Los Angeles Chapter.

Didi is a judge on the #1 digital record-breaking business show “Entrepreneur Elevator Pitch.” She starred in the movie documentary “Impact” about her life as a public speaker, due to be released in early 2020. She will be featured in the upcoming issue of the Oprah Magazine as the woman to watch in “Women Who Mean Business.”

She is a best-selling author of “Success Breakthroughs” coauthored with Jack Canfield. She has appeared on NBC, ABC, CBS, Bravo, E! and Fox. She was recently featured as a top entrepreneur in The Wall Street Journal and USA Today.

Didi is the recipient of the highest level award of “Women of the Decade for Entrepreneurship and Venture Capital” from the Women Economic Forum that has 800 Chapters all over the world. She has also been honored to speak at the Global Entrepreneurship Initiative at the United Nations, New York City. Last December, she was given the Certificate of Recognition by the Los Angeles Mayor Eric Garcetti for helping women entrepreneurs succeed.

Her superpowers lie in the fact that she manages her four children under the age of eight, including a set of identical twins and all her projects, always with a smile on her face.