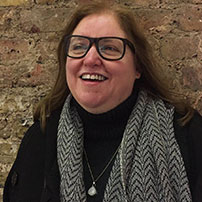 Head of Mission, All Together in Dignity Fourth World

Diana Skelton spent nine years as part of ATD’s International Leadership Team, supporting its members in the Central African Republic, Haiti, the Philippines, Ireland, and 30 other countries. As part of ATD’s full-time Volunteer Corps since 1986, she has lived and worked in low-income communities in Madagascar, the US, and France, and has represented ATD at the United Nations and UNICEF.
In 2004, Skelton edited How Poverty Separates Parents and Children: A Challenge to Human Rights, a study carried out in six countries, with a foreword by UNICEF. In 2014, Skelton published the first volume of Artisans of Peace Overcoming Poverty. The second and third volumes of this book were published in 2015 and 2016.
Skelton is a member of the Global Coalition to End Child Poverty. Her degree is in history from Cornell University, and she has a background in youth work and in journalism. She is currently preparing several publications.
In May 2017, at the Women Economic Forum in New Delhi, Skelton was honoured with the Award of Iconic Woman Creating a Better World for ALL.