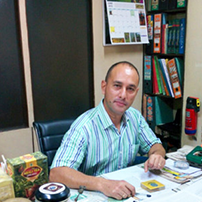 DHRUBAJIT CHALIHA has been educated at St. Edmund’s School and College, Shillong and thereafter in Commerce at Delhi University. Since 1997, he has been actively involved in the marketing of the Company’s branded tea, Korangani Tea and has hands-on experience with the Research & Development, designing and launch of different variants of their successful packaged tea brand. With strong focus on retail, he has been responsible for introducing and marketing their brand in the Modern Retail Trade and in the open distribution markets of North-East and Eastern India. The brand Korangani Tea is now a household name in these regions and continues to command a major share of the competitive packaged tea market.
With an eye on continuous growth, Korangani Tea is now poised to enter the discerning yet thriving packaged tea market of South India, with initial focus on the metro cities of Bangalore & Chennai. Dhrubajit is married to Kakoly and they have two sons, Ronojit & Orijit.