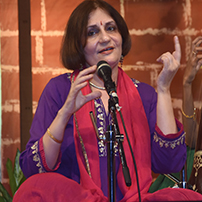 Dhanashree is one of the leading Indian Classical vocalists in India today, her speciality being the “Thumri” or semi-classical genre of music. She is committed to giving thumri its rightful place on the concert stage and preserving and spreading the gayaki popularised by the thumri legends, particularly Begum Akhtar and also her Guru Shobha Gurtu.

She has trained in Khayal under the stalwart of the Kirana Gharana Pt. Firoz Dastur and further specialised in THUMRI under the guidance of the thumri legend Shobha Gurtu. She has a Masters degree in Music from the Bombay University.

She has performed in all the leading music Institutions in Mumbai and all over India and has toured the U.S. several times for concerts and music workshops.

Dhanashree has been conducting lecture demonstrations and workshops on the Appreciation of Hindustani music and her talk at the TEDx conference in 2010 on “the essence of indian music’ was widely acclaimed.
She is a visiting lecturer on Thumri at the SNDT university Mumbai.

Dhanashree was awarded the “PILLARS OF HINDUSTANI SOCIETY” award for 2007-2008 by the Trans Asian Chamber of Commerce and Industry for her outstanding contribution to Vocal Hindustani Classical Music.

On March 8th 2017, on the occasion of International Women’s Day, Dhanashree was conferred the “Women Achievers Award” by the Indo American Society Mumbai for her outstanding contribution to Indian Classical Music.

Her more recent foreign tours include a concert series in New Zealand in November 2014 and in Sept. 2015 an invitation by University of Rhode Island as a “Distinguished Visiting Artist” to perform concerts / teach and interact with their choral / jazz bands on World Music projects.

She has also been teaching INDIAN VOCAL TECHNIQUES to renowned Jazz Musicians from all over the world and has recorded fusion albums with many of them.

She has released several albums entitled “Saawan ki thumri”, Barsat Rang, Mumbai Masala (fusion) under the banner of TIMES MUSIC and “Kanha Re” from Dreams Entertainment and her latest releases is are 2 World Music albums “Always Here” released by Amoka Records and “Let’s Merge” by Merlin Music.