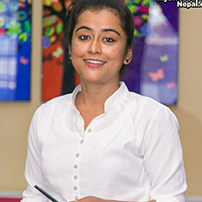 Devaki Bist. I was born and brought up in Far-Western district of Nepal and received my education in the district of Kanchanpur. This region taught daughters to be school teachers and ten to five easy government job holders. The culture there then, especially in the mountain regions, generally never allowed daughters, to go to school, travel alone, freedom of speech, go with boys or play, rather they were married early. Involving herself in such activities were considered shame to her family. According to my interest, standing firm against such culture, I choose to be a journalist, with lot of freedom to speak, move on with boys and work day and night. I started my journalism from the remote western Nepal and traveled around seventy districts of Nepal. I took basic journalism training in Kanchanpur district for only once. I have keen interest in journalism, documentary film making and social work. The nine years of my professional life has taught me that practice is the stairs to success and practice has shown me my path forward till now. In my journalism career I never afraid to raise my voice and write on any context. When I wrote on rape, domestic violence and crime I was even threaten for life but I too stand on my own and defend it .It took me six laborious year to accomplish my documentary film on “Deuki custom”, where a family or an individual offer a young lady to the God to fulfill their wish. Which is still practicing in far west region of Nepal .Which was very perilous .Because it concern directly to the religion and faith that people believe. I was awarded from national and international level for my hard work.