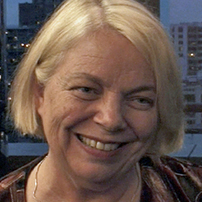 Co-Director of the Nightingale Initiative for Global Health

Deva-Marie Beck, PhD, RN, DTM is a Canadian / American who has been working — for three decades — on approaches to NGO citizen education and advocacy for advancing global health and the UN’s Global Goals — the Millennium Development Goals (MDGs) 2000 to 2015 and now the Sustainable Development Goals (SDGs) to 2030. With this focus, she leads NGO efforts to connect, around the world, with nurses and midwives as prime stakeholders to achieve these Global Goals related to healthcare delivery and health determinants. Since 2006, Dr. Beck has served as International Co-Director of the Nightingale Initiative for Global Health (NIGH) — based at NIGH World’s headquarters in Canada’s National Capitol Region and in Geneva, Switzerland. In this role, she has traveled to 25 countries to lead NIGH’s work through UN Briefings, educational workshops, website development — feature news articles, photo-journalism and videos [in 8 language versions] — related educational campaigns and keynote presentations—recently, to achieve NIGH’s ‘Special Consultative Status’ a top-level NGO award granted by the United Nations Economic & Social Council (UN ECOSOC) in 2018.
Her clinical nursing career specialized in critical care and women’s health [1972 to 2002] and — with a growing concern for global health and humanity’s well-being [1992 to the present]. Dr. Beck received her PhD in Interdisciplinary Nursing Studies & International Development from the Union Institute in 2002. Beginning in 2009, Dr. Beck conferred with key UN officials to involve nurses and midwives in public advocacy to achieve the UN MDGs — resulting in worldwide commitment to MDGs advocacy during the then 2010 International Year of the Nurse — including to a standing-room-only attendance and worldwide webcast of the 2010 Global Nightingale Service at Washington DC’s National Cathedral. Between 2012 and 2014, Dr. Beck focused on UN MDG # 5 ‘Improve Maternal Health’ with NIGH’s ‘Daring, Caring & Sharing to Save Mothers Lives’ online public education campaign, achieving more than 3.5 million hits from 90,000 unique online visitors from 146 nations.
In 2014, Dr. Beck and NIGH’s team of UN NGO Representatives developed an educational Global Online Briefing called ‘The World Nurses Want’ to involve participating nurses in the UN’s ‘The World We Want’ campaign — in advance of the UN SDGs — and produced a video titled ‘At the Heart of It All: Nurses & Midwives for Universal Health Coverage’ — targeting UN SDG # 3 — premiered at a WHO Global Forum for Chief Nursing & Midwifery Officers and since featured at WHO briefings and conferences worldwide. Dr. Beck has keynoted at five International Nursing Conferences of the Commonwealth Federation of Nurses & Midwives from 52 nations [2012, 2014, 2016, 2018 and 2020] in London, U.K. recently with her keynote: Celebrating Our Heritage & History: Committing to Our Now & Our Future and is slated to keynote there again in 2020. She co-authored the award-winning ‘Florence Nightingale Today: Healing, Leadership, Global Action’ [2005] and has since authored and co-authored numerous related book chapters and articles — most recently for the May 2019 Edition of the American Journal of Nursing (AJN), “Nursing and the Sustainable Development Goals: From Nightingale to Now” and a leading article “In Nightingale’s Footsteps—Individual to Global: From Nurse Coaches to Environmental and Civil Society Activists” for the August 2019 issue of Creative Nursing: A Journal of Values, Issues, Experience and Collaboration — the first peer-reviewed nursing journal to devote a full edition to addressing climate change.
Dr. Beck is also an active member of the “Yellowhead Trail” Chapter of Toastmasters International (TI) and has served as an 2018-2019 Area Director for TI District 64. Based on eight years of accomplishing a series of 40 required presentations and related leadership activities to educate and empower the personal and professional growth of her peers, Dr. Beck has recently achieved the highest-level education Award from TI — as a Distinguished Toast Master ‘DTM.’ She now aims to use this ‘credential’ to develop innovative ways to educate, encourage and engage nurses and concerned citizens to share their voices and tell their stories in the global civil society arena.