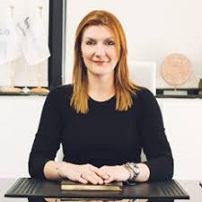 Despina Panayiotou Theodosiou is joint Chief Executive Officer of TOTOTHEO MARITIME, an organization offering maritime services with specialization in maritime satellite communications. She has been with the group since 2005.
Since 2013, Despina is a member of the Board of Directors of the Cyprus Shipping Chamber, being the first woman ever to be elected since the Chamber’s establishment in 1989, and is chairing the Chamber’s Development and Promotion Committee since 2015.
In 2011 Despina founded WISTA Cyprus – a member of WISTA International – and is the Association’s current President. In 2015 during the International AGM, Despina was elected Secretary of WISTA International.
She also sits on the first Board of Governors of the Cyprus Maritime Academy and on the Board of Directors of the Cyprus-Germany Business Association.
Despina is the national advocate for the European Commission’s “Equality Pays Off” Initiative. She won the titles of “Top Professional” and “Cyprus Business Woman of the Year” at the 9th National Cyprus Business Woman of the Year Awards 2015. She is also proclaimed as an Honorary Fellow of the Cyprus Institute of Marketing (April 2017).
She is frequently asked to contribute as a speaker or moderator to industry-related conferences and is often asked to speak about her experience as a young female leader in the maritime industry.
Despina holds a bachelor degree in Economics from the National and Capodistrian University of Athens and an Executive MBA in Shipping and Logistics from the Copenhagen Business School. Believing in (and advocating for) continuous education, she is currently completing the Postgraduate Diploma in Financial Strategy at the University of Oxford – Said Business School.

She is married to Socrates and they have a three- year old son, Ektoras.